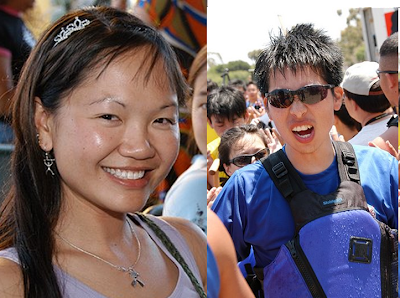 
Hometown?
Pearl: Born and raised in Guangzhou, China, origin of Cantonese (no, they're not originated from Hongkong). Lived most of my life in Alhambra.
Kevin: A few of them: Spent the early years in HK when it was still a British colony, then spent some in Miami, a couple more in West LA, and for over a decade in Arcadia. Can't quite decide which one would be my "hometown"... pretty much spent a few years here and there.

How long have you been paddling for?
Pearl: Forever, can't believe I've stuck with this for 7 years (being a Pisces makes me loose interest and focus quickly and easily)!
Kevin: Spent the first season paddling with an NGIS team I can't remember the name of in '06, took a haitus with SD right before the tourneys in '07, and rejoined mid-season '08, so that makes... probably a year or so cumulative.

Why do you paddle?
Pearl: The answer to this question is always evolving. In the beginning it was because I was young and had endless energy so instead of spending money to drink and party I'd go paddle. As I grow older, it's because the team is like a baby to me. I've watched it grow from a bunch of clueless folks to a competitive team. So I want to be there for every step it takes.
Kevin: It's a motivation to work out. The first season with SD I just couldn't wait to hear the jokes that, as I was still trying to catch my breath, people could talk and laugh. The camaraderie and team activities makes it all the more worth it. Don't mention "why do we allow ourselves to do painful land workouts before and after paddling?"

Favorite or notable Space Dragon moment(s)?
Pearl: Holy smokes, so many! Here are some higlights from each year I've paddled: Kevin: Joe and Yonnie's well planned surprise happily-married celebration at practice. Not only was it a well-kept secret, Joe's absolutely frustrated look was worth every bit the running around in making it a most memorable practice.

How do you prepare yourself for a Race?
Pearl: Nothing special. I'm just always ready!
Kevin: Sort of like cramming, sand dunes, running, and more cardio a few weeks prior to races just to make sure I don't run out of breath. There's really no preparation beyond that and making it out to practice. Just have to trust muscle memory.

Any hobbies, activities, interests outside of paddling?
Pearl: Hiking (which I haven't done enough of in the past 2 years); learning something new (call me a nerd but I love taking classes, I crave having to do homework and study for a test, to test my knowledge); anything on wheels; any water sports
Kevin: Big on snowboarding: it's relatively effortless in that you pay to have a lift carry you up to the top, and you slide down. Recent interest: badminton. I'm on and off for hikes and bike rides, but an occasional bit of outdoorsiness doesn't hurt.

Any advice for new Paddlers?
Pearl: Don't worry about how you look and feel, especially compared to the vets. It comes with practice. None of the vets started knowing how to paddle in this sport. Oh and paddling with a hangover is not a good idea, it's rather miserable.
Kevin: If you follow Joe's workout, there won't be any problem with cardio or strength. Run before, paddle until it hurts, and workout after. Be open to constructive coaching and you'll look like Rod and paddle like John in no time.

Are you a better Paddler when you are Happy or Angry?
Pearl: When racing, probably angry, gets me pumped up.
Kevin: I'd say the adrenaline really helps when I'm angry/frustrated. Not that it helps timing at all, and might even through it off some, but with anger comes adrenaline which translates to power.

Favorite part about being a Space Dragon?
Pearl: Toeing the line between having fun and being competitive. It's a delicate balance but we have an excellent group of people to keep us there.
Kevin: Having an extended family with such diverse backgrounds that you're bound to find a member with almost parallel interests. Being SD is really like being in a family. People take care of each other on and off the water.

You have a single brother or sister. What Space Dragon would you consider hooking them up with?
Pearl: Not an easy question to answer as I am an only child and not much of a match maker. Considering strictly single guys and gals (or so I think they are), for a sister would probably be Charlie because obviously I like them white meat so I would imagine if I had a sister, she would, too. For a brother would definitely be Janet assuming that he fits all her criteria!
Kevin: For a sister, most of the SD guys are quite ripped... very much up for grabs.
For a bro, lotta hot ladies to choose from :D
Most interesting character you've met through the team?
Pearl: Another tough one. I've met a lot of folks through this team and everyone's quite unique and interesting in his/her own way. If I have to pick one that stands out, I would say Emily. I see traces of myself in her (but I'm not as hard headed, hehehe), she brings out the (hidden) competitiveness in me.
Kevin: Gotta be Ceez, our fundraising guru, apparel logolizer, team jester, and best of all, he doesn't charge people for hugs with Deej!
If you could change one thing about the Team, what would it be?
Pearl: I wish everyone could be more responsive and punctual! Do you know how much easier life would be if everyone would read the emails and be responsive?! Think all the waivers, money, Evite responses, etc. Punctuality is my personal petpeeve, there are only 24 hours in a day!
Kevin: Couldn't really think of changing something best left to build itself. There is so much SD love, who needs a change?
Any interesting facts about yourself - or secrets that you want to divulge?
Pearl: Secrets are called secrets for a reason, only I will know my deepest and darkest secrets, muhahaha! Now an interesting fact...hmmm, I'm 1/8 French -- my great grandmother was French. How did a French woman end up with a Chinese guy in those days, I have no idea!
Kevin: From what I hear, I'm totally picture crazy... not that I like being in pictures as much as I like creating one. If you're not photo-shy, let me know, and I'm sure I can capture at least one good picture in a day of SD events =).
Posted by space_dragon at 12/17/2008