First off, thanks for everyone who contributed their stuff, their time and their resources that made it possible to rake in the dough for all our junk. Being that we are Space Dragons and not normal people, the yard sale was anything but typical. There was never a dull moment! From cross-dressing to synchronized push-ups, from bites on the arm to kicks in the chest, this was one memorable yard sale! 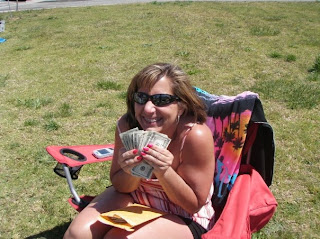 Top Seller: Movies and videos games donated by Denise: $75 before we were even done setting up!

Best Salesman: Phil: He was able to sell a broken lamp.....'nuff said!! 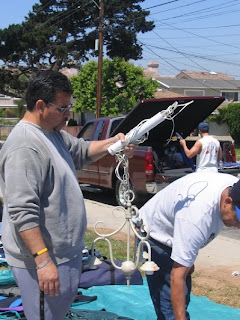 Number one highlight: I guess being in the Sun for so long had a severe side-effect on the guys' abilities to think straight. For one reason or another, it seemed like a good idea at the end of the day to have the studdly Dragon men put on a fashion show with all the lovely women's clothing that had yet to sell. Notable outfits included Galen's sheer black top that almost fit around his manly chest, Devant's fuzzy tan coat accentuating his sexy six-pack, Cesar's hot black dress with the split up the leg to show off his goods, and Yours Truly in a simple yet sophisticated black dress with white accents, with non-matching purse, straw hat and red high heels! The Dragon women could not get enough of this. All I have to say is shame on you Lady Space Dragons! You were the enablers! And you made sure to take tons of pictures to capture us in our weakened state forever! 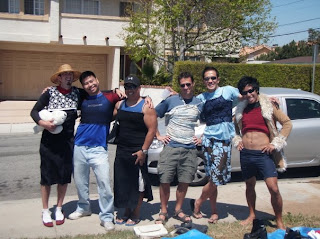 Other memorable highlights: I don't know what Joe's idea of a garage sale is but he was caught giving orders to Tran and Deej to "work the street corners" to bring in business. I guess he feels anything is on the table if it is for the Mighty Space Dragons! 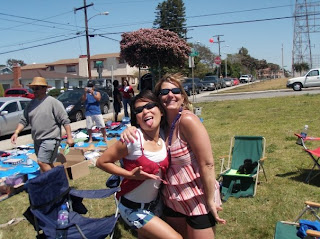 Galen's tenacity and Pearl's ferociousness collided in an ugly exchange on the grass in the middle the yard sale. Galen wanted Pearl to model clothes; Pearl wanted Galen to leave her alone. To no one's surprise, Galen winds up with a nasty bite mark on his arm and Wade (who took Galen's side) took a few solid kicks to the chest. Pearl walked away unscathed with a big smile on her face. 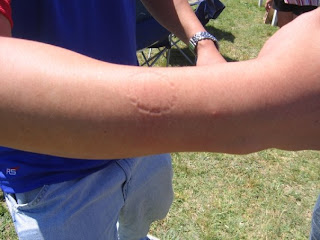 Phil's amazing sales skills came to shine when he was able to sell a DVD player that was returned. The first person returned it after buying it for $15, saying it didn't work (I verified that it did). Phil, as promised, sold it later that day for $20! And as he also promised, he was able to get a sucker (thanks Scott!) to by a DVR for $70. As a result of Phil keeping his promises, the Space Dragon men had drop and do 100 push-ups (we originally agreed to 50!). And we did this in true SD fashion: together in a two-by-two lineup with (almost) perfect timing!

Thanks to Denise, Joe, Rod, and Janice for supplying tarps, tables, and tents.

Thanks to Zoe, Kat, Deej, Ceez, Kenny, Phil, Robert, Mayana, Wade, the Matsunamis, and everyone else who supplied food, drinks, and adult beverages for the hungry and thirsty Dragons.

Again, this was a great day and we are all very pleased with the revenue we generated, which should help keep costs down for all Space Dragons. The venue seemed like a great place (except for the land mines) so for our next yard sale of this season, I would be happy to host again!!!

Ed note: Big Thanks to Jeremy for being such a great host, push-up artist, model, and bathroom provider!
Posted by Galen at 4/23/2009