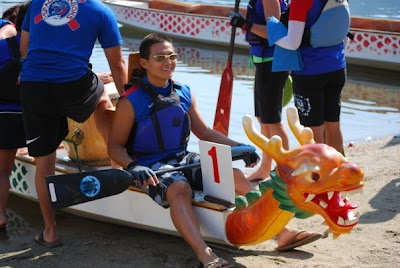 Hometown?
Roger:
Diamond Bar. 909, son! But I've set down some roots in Irvine now
Birthday?
Roger:
19th of September
Favorite Food(s)?
Roger:
I can eat Chinese food for every meal for every day for the rest of my life and be perfectly happy. Bonus points if that food is homemade!
How long have you been paddling for?
Roger:
My first time out was Memorial Day, 2009.
Why do you paddle?
Roger:
At first, it was an excuse to get out in the sun, start off my day in a productive way, and get in and stay in shape. It also fired up my competitive spirit.

But now, it's just as much about the people. I love me some space dragons! mmm yummy yummy. I find myself spending more and more of my free time with fellow Space Dragons, getting into more activities and events that other teammates are into. (Ed note: Muhahahaha we traped him...good job guys!)

Are you a better Paddler when you are Happy or Angry?
Roger:
Angry. When I feel that muscle burn, I get angry. At myself. To me, that burn is nothing more than weakness. I hate being weak. I do not want to be weak. I want to extract that weakness from my body. So the yelling in my head starts - I have to do better, paddle harder, pull stronger! Rawr! And that's just the censored version. The anger drives me; the weakness feeds me.

Plus, while I'm concentrating on breathing and technique, struggling with the burn, I see little girls like Mayana, Jackie and Sammi making it look effortless, chatting about purses or shoes or whatever girls talk about. That just makes me even more angry (because of my own weakness) and gives me more drive to kill the weakness in my body. Our strength grows out of our weakness.

Favorite or notable Space Dragon moment(s)?
Roger:
Ok, so I think we know what my most "notable" Space Dragon moment was, so I'll just go with my favorite (and if you don't know... ask me so I make sure you get my version - the correct version).

Now picture this. It’s a beautiful day in Long Beach. The beaches are abuzz with the excitement of the Tournament. A bunch of newbies load up on the White boat, knowing nothing but to be legit. We’re ready to take on what may come - everything is still so new: the adrenaline, the noise, even the water seems somehow foreign. Chanco calling, I'm stroking with Lil Lui. This race will determine whether White boat will go to the Finals and have a chance at hardware. I want that Gold. I can almost taste it. The race happened so quick, it was nothing more than a blur – after the start, Chanco began screaming a series of non-stop “Ready... boost! Ready… boost! Ready... boost! Ready… boost!” all the way through the finish. We felt like we were dying: arms noodley, brains fried, lungs empty. But. It. Worked. First to cross the finish line, suckers! Oh the adrenaline. The glorious feeling of victory! Oh who’s your daddy?! The boat erupted in a cacophony of roars and whoops! Our bodies broken but our hearts full! What a high! Better than heroin and none worse for the wear!
How do you prepare yourself for a Race?
Roger:
I’ll have to give you the censored version. I pump myself up by telling myself what a worthless pile of crap I am; how everyone else thinks they’re going to win because they think we’re nobodies... we’re nothing. Nobody likes us and we’re the scum of the earth. But they don’t know us! They don’t know what we can do! So screw them and anyone else who don’t believe! We don’t need them! We here and we ain’t here to play no games. Fun? Screw “fun” – you can have it, I’m here for the damn medals! I'm here to crush the competition! Come ride with the big boys and we’ll show you how it’s done! We here to win! Pain is temporary, glory is forever! RAWR!

It's either that or I quietly think dirty thoughts about whoever may be calling for our boat (Have I mentioned that I love stroking?). (Coaching note: Do NOT have Galen call Roger's boat EVER!!!)
Any hobbies, activities, interests outside of paddling?
Roger:
Surfing! yay! I haven’t missed a weekend since Tran introduced me to surfing. I'm also down to do or try any activity that will get my blood pumping. I'm an adrenaline junkie and I want to feed that addiction! Sky diving, bungee jumping, jet skiing, jumping off a waterfall in a wooden barrel, you name it, I'm there!

I also ride motorcycles and race in an amateur time-attack format race series (on four wheels).
Any advice for new Paddlers?
Roger:
Whatever you enjoy doing, I guarantee there is a Space Dragon that likes or wants to do it too. Or perhaps there is some activity you'd like to try? Again, I'll bet there is a Space Dragon that does it (or wants to). Embrace us and we’ll embrace you.
Paddling-wise, any particular goals for yourself or the team?
Roger:
Endurance. Paddling started off as a new addition to my fitness regimen. Now, paddling is central to it – everything I do is to help me become a better paddler. I want to be able to do a 500m full race pace as effortlessly as those little girls I mentioned earlier make it look. I know I tire out toward the end of the race. I need to fix that.

If you could change one thing about the Team, what would it be?
Roger:
I’d make everyone love eating L&L after practice! om nom nom nom (Ed note: Noooooooo!!!!)
Favorite part about being a Space Dragon?
Roger:
The fun we all have together. Whether it’s practice, eating, surfing, eating, playing rockband, eating, or just hanging out (or eating). Hanging at the Matsunami Manor, talking smack to one another. The camaraderie. It’s a rare thing to find these days. And it’s all fun and it’s all family, baby!

But the absolute best part? Being a Space Dragon makes me want to be a better me. That might mean becoming more physically fit to become a stronger paddler. But it also means becoming a better person and trying to be a role model for the younger generation. I look at Hafer and see a fun-loving, big-hearted goon. Someone I want to be like when I grow up - full of life and loving every moment of it. I look at Tran and see a hardcore fitness enthusiast who will kick my butt if I get lazy, but also a person who readily opens up her home and cares so deeply for those around her. There's Wade, the ever-inspiring coach who always believes in us, and that's a powerful, powerful motivator. On the other side, there's the Matsunami kiddos, Megan, and plenty of teammates still in college - all full of hope because Real Life hasn't crushed their spirit yet. No wait, I didn't mean that. Rewind. All full of hope, with futures bigger and brighter than they can even imagine or dare to dream. And finally there's Rico. Well, I guess he's like our retarded brother who we have to watch out for in case he trips over his own feet. In the end, what I'm trying to say is that the responsibility (real or imagined) to our teammates boil down to being the best "you" not only for yourself, but for your teammates as well. Because you never know who might be looking up to you. And that's my favorite part about being a Space Dragon. What's not to love?
You have a single brother or sister. What Space Dragon would you consider hooking them up with?
Roger:
Hands down, no hesitation, not a second thought required. Russ. Hell, if he were a chick, I'd marry her. Total man-crush. Yea, that's right. I'm not afraid to admit it. Absolute marriage material right there. The complete package. Have you seen those food pictures he’s posted on facebook? Goddamn, son. God. Damn. Let me make that clear: God. Damn. He's everything a man can ask for (except for the whole penis part, nothing a little surgery can't fix though).

Louise is lucky to be living with him. That's all I know.

Most interesting character you've met through the team?
Roger:
Devant. Part monkey (as KMak says) and part Dragon Ball Z character. I’m so jealous of the hair. Homeboy is as charismatic as they come, too.
Any interesting facts about yourself - or secrets that you want to divulge?
Roger:
Interesting Facts: Pepcid AC really helps with Asian flush. Take it a half hour before drinking. The name "Raja Ree" caught on more than I thought it would, and it stuck. So if you're confused by that person on facebook, he's just me. A friend told me recently that I should start a weekly blog so I can share all of my messed up theories and thoughts with the public. I think such a blog would only get me in trouble. Contrary to popular belief, I am not the most handsomest man in the world. The most handsomest man lives in San Francisco. In fact, I think many of you met him during the tournament there, his name is Robert! A little bragging here: my 5 year old nephew plays AYSO soccer. He body-checked some kid to the ground. That kid started to cry, and my nephew, to my sister's (his mom's) utter dismay, says to him while standing over him, "There's no crying in soccer!"
Secret: Discretion is the better part of valour (apparently I'm not very valiant).

Who got you into Space dragons/Dragonboating?
Roger:
Rico and Jeremy (BJ). Jackie was supposed to be the person to bring me out, but the brown and black team intercepted me and brought me out first.
How did you meet him/her?
Roger:
eHarmony.com. We were matched on 37 different levels of compatibility. But really, it was love at first sight. (Ed Note: Poor Mike)
Posted by Galen at 11/12/2009