Just a few short weeks after a very successful showing at Big Long Beach, the Mighty Space Dragons participated in another local tournament located in the San Bernadino National Forest, at a Lake named Gregory (officially named the 2011 Lake Gregory Dragon Boat Tournament). With tough boats, tough water, and tough competition, you paddled in true Space Dragon style! And you even picked up some hardware along the way! 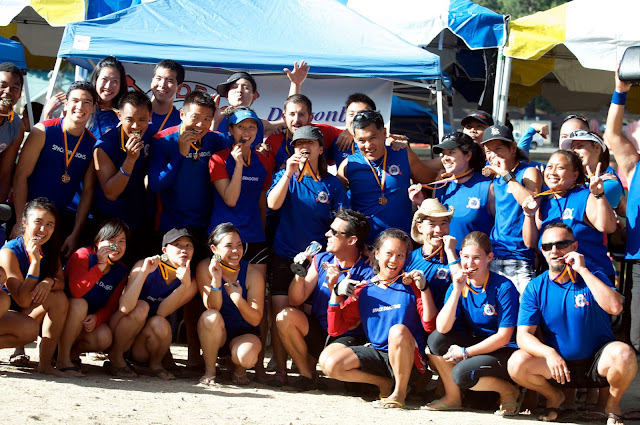 How did the day go? Well, everybody arrived on time and helped set up camp.  Even though Es took a little detour, he got Scottie and equipment-in-tow to the race site in plenty of time. Being entered in the short-team division made the morning a little long as our first race was not til heat 5, or about 10a, so there was plenty of time to fuel up, "unload" and mingle. 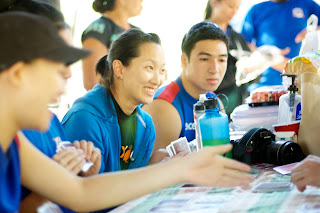 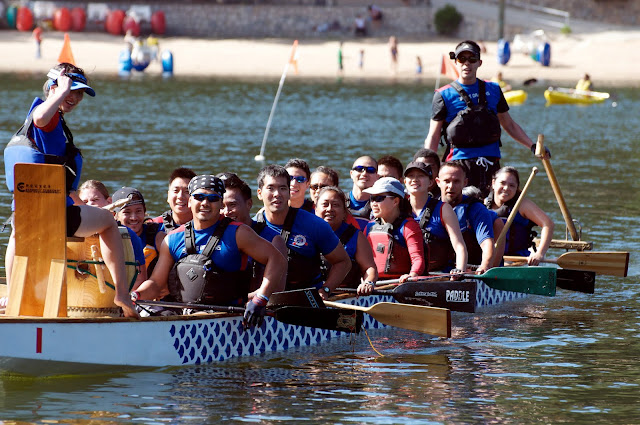 And the races?  As we were racing in the 12-paddler short team division, it goes without saying that the boats were both heavy in and high off the water.  Space Dragons made up 2 of the 4 teams in this division, and with only 2 scheduled heats in each division, there was no time for sand bagging. Each race is for the win, and Brown Cow showed us how it is done in the 1st heat with a SOLID start, no mercy in the body, and a powerful finish for a commanding 1st place finish 8+ seconds ahead of Brown Chicken's 3rd place run. For perspective, compare Brown Cow's 1:39 12-paddler time to the 18-paddler boat times 1:33-1:45!!! Smokin'! AS medal contention is calculated by average of the 2 heats in this division Brown Cow was well positioned for Gold after the the 1st heat. Brown Chicken paddled hard but with a combination of my novice seating skills and what seemed like a "no-glide" boat, they had a tough heat for their 3rd place finish. As the day went on, every team dreaded the prospect of getting assigned that boat #3. Pause... I would like to take a moment to thank new callers like Turtle and Eric, and newly certified steer Zina for being game, allowing everyone a chance to paddle! 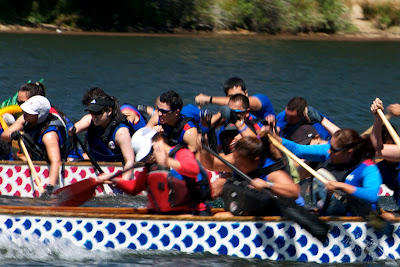 Back to the races: In the 2nd heat with the same 4 boats, with different lane assignments, it was time to dump it. The head wind was pretty serious at the start line by this point so we were in for along race! Hooooonk! And the race is ON! This heat was very different than the 1st heat with all 4 boats neck-in-neck for the body of the race and through the finish with Brown Cow and Brown Chicken again taking 1st and 3rd respectively, ensuring Gold for Cow and Bronze for Chicken, and setting the stage for a strong 1000m "Guts of Gloria" chase race. The chase race was 3 or 4 boat heats, 1000m with 1 turn at 500m, no lane assignment, 5 second staggered starts. The starts were hilarious with some boats so far back off the start line that they either crossed the start line at the same time as another team and/or started 20m or more behind the start line. Luckily, Space Dragons were 1st in the start sequence in their heat so they started AT the start line .... And we have lift-off (TWSS)!!! Good start, solid 1st 500m  keeping the young Dragonauts at a distance, then that turn, fast and tight, created a lead large enough that it they couldn't hear the boats behind them anymore! The last 500 with a strong finish placed them a solid 3rd overall!!! 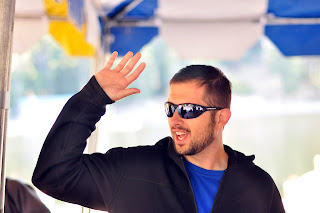 So in Summary, what makes a successful tournament? I suppose, as are most things in life, its subjective, in relation to the one asking the question. It may include things like: "We earned medals," or your "first" medal, or "we had a great time." Maybe, you learned more about some of your teammates or gained a better understanding of what "team" means. Maybe you learned something about yourself, pushed your physical or psychological boundaries, or tried something new like calling or chase races.  Maybe it was that we had plenty to eat and drink, or that we all arrived to and returned home safely. Whatever measure I can think of, from what I saw, and experienced, our little Lake Gregory tournament was a HUGE success. Sure, the races were few, but were they any less furious?  The day ran slow, but was there not ample opportunity to "play" with teammates?
As coach Ceez pointed out:
"... I liked that even though the Space Dragons went head to head twice today, there was still love flowing on the boats and in the camp..."
~ROBERT 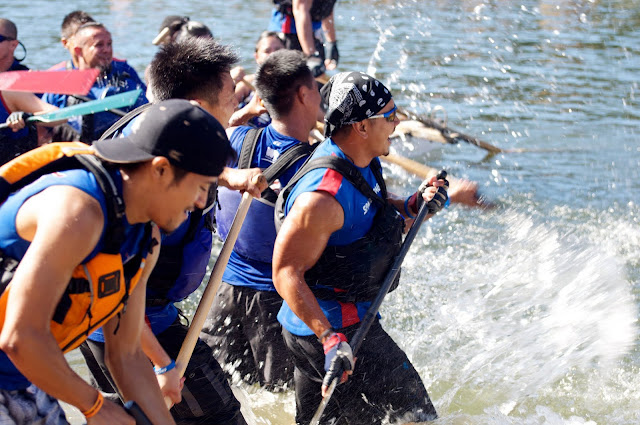 So here's a chronological LG Tourney TOP 10 recap by ZINA!
1.       SNIFF SNIFF – Our dedicated Space Dragons started the day brighter and earlier than usual. We woke up before dawn to make it up the mountains for the 7:00 a.m. call time. Sooooo, guess who else showed up at the LG Tourney for the 7:00 a.m. call time? It was Mr. Porta Potty Man. He was cleaning out the LG potties (ew, gross!), and that smelly stuff lingered on in the morning mountain air for a while.
2.       NOM NOM – We set up our tent space, arranged our tourney chairs and enjoyed some good ol’ LG downtime. What do we do when we have downtime? We chat, we listen to music, we eat, we put on sunscreen, we eat, we nap and we eat. Everyone brought some amazing food.
3.       SHUFFLE – What else do we do in the downtime? We shuffle up and deal! We played cards (thanks to Louise and Russ for teaching us all how to play “that card game”) and we played Taboo via Roger’s app on his phone (thanks Roger for the 500 extra words).
4.       ZIP – Then it was time for us to prep for our first race. The coaches gave us the signal to change gears, get focused and do what we came to do – get in that lake and race! But wait, we were having trouble zipping up our PFD’s. Doh, the high altitude caused those PFD’s to e  x  p  a  n  d. Some of us were trying really hard to gear up. Now it’s time to introduce the mighty boats. SD raced two boats (12 paddlers to a boat) in the Mixed Short Division.
5.       CLUCK – Brown Chicken: Eric, Sammi, Steph, Bri, Mayana, Karen, Robert, Kevin, Jim, Allan, Es, James, Claire, Christine, Scott, 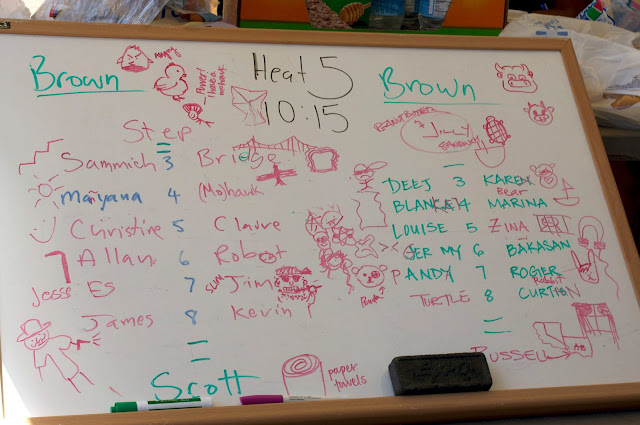 6.       MOO – Brown Cow: Turtle, Deadra, Karen, Marina, Blanca, Jill, Louise, James, CJ, Roger, Andy, BJ, Russell, Zina. Both boats finished with impressive times in the first heat, and then pushed themselves again in the second race which resulted in 1st and 3rd place finishes at LG. Good job Brown Chicken! Good job Brown Cow! Did you know? At Lake Gregory, SD’s 12-paddler times were 1min 39s and 1min 48s for 300m? Not too bad right? But when you compare that to some LG 18-paddler times between 1min 33s to 1min 45s for 300m… that shows how strong you are Space Dragons. That shows how much your effort and determination is paying off! 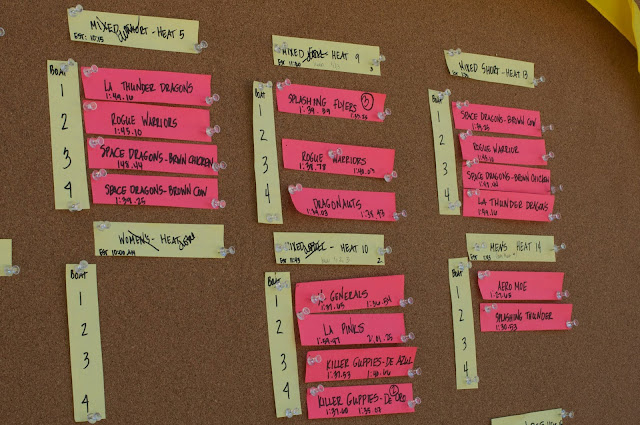 7.       POP – The festival organizers announced a water balloon toss contest for all the racing teams. Those of us ready for more competition quickly formed teams of two and stepped up for a chance to be the 2011 Water Balloon Toss Champs at LG. All teams lined up, partners faced each other and started chucking those water balloons. After a number of elimination rounds, there were only two teams left! SD’s Roger and Steph and Dragonauts Lester and Craig. Can’t say if it was the delicate youthful hands or the quick teenager reflexes, but the high school kids narrowly beat out SD! Congrats to the Dragonauts! You guys are defending champs for next year’s balloon toss! And then there was Guts and Gloria. What’s Guts and Gloria, you say? Well it’s 18 gutsy paddlers for 1,000 glorious meters at LG, plus a sweeeeeeeet u-turn around a buoy. 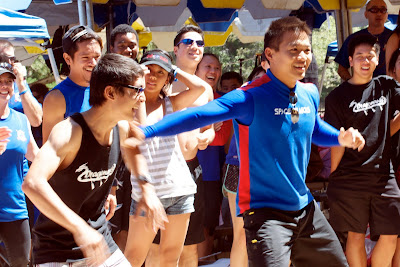 8.       CHUM CHUM CHUM – Guts and Gloria: Steph, Bri, Es, Eric, James, Andy, Kevin, Deej, Christine, Karen, Allan, Louise, Claire, Jim, James, Roger, Zina, Curtis, Jill, RussellThe pace was smart. Not too fast where we would gas out, but a nice steady rate. Oh boy, but that u-turn was full of adrenaline! Our strong SD chummers and Russell as steersman showed lots of power and control. We pulled out of that gorgeous turn and gave it all for the finish (another 500 meters!). Congrats to the Guts and Gloria boat on their 3rd place finish! 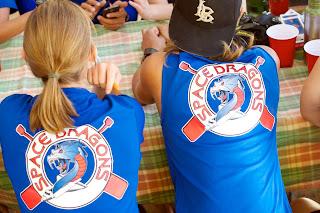 9.       SPLASH – As with any other celebration of a job well done, we ended the tourney with some water fights and dunking!

10.   BROWN CHICKEN BROWN COW – Two boats, one Mixed Short Division, one lake, and one team! We all represented Space Dragons with fun, athleticism and pride at LG. No matter how you add it up, one brown chicken, one brown cow, one guts, and one gloria. Yup – all teammates, all together one mighty team! 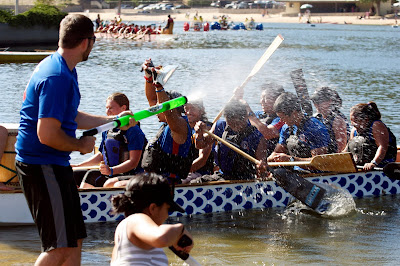