Preseason Kickoff
First off, I just want to say amazing job this past 2017 season! Now that it's all done and you've had October to relax, we're starting back up this weekend! Great news for those of you itching to get back on the water, we'll be resuming practice November 4th.

2018 Races
Tempe Dragon Boat Festival
Where: Tempe, Arizona
When: March 24-25
Tempe is our opening race of the season and definitely a fun way to start the year! It's usually pretty warm and dry, and we'll be able to race teams from all along the west coast. 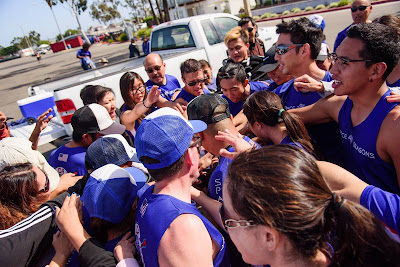 Long Beach Spring Race
Where: Long Beach, California
When: April 22
Also known as "Baby Long Beach", this local race  is great for newbies and vets alike.  It's a low commitment race since it's right here at home and one day only!

Concord Pacific Dragon Boat Festival
Where: Vancouver, Canada
When: June 22-24
The big race of the year! It's the perfect opportunity to race against high level international teams and try to qualify for the 100m knockout races and the famous Guts and Glory race! It's been about 6-7 years since we've gone, so it'll be a fresh new experience for most of the team!


Long Beach Dragon Boat Festival
Where: Long Beach, California
When: July 28-29
Biggest race on our home turf! A larger version of Baby LB with teams from all around. Another great chance for newbies and vets alike to race at home.

Portland Dragon Boat Festival
Where: Portland, Oregon
When: September 8-9
This one is a relatively new race for us, since we've only gone once. However it has a beautiful venue and pretty competitive since we get to race against strong teams from all around the west coast.

One Step at a Time
With our goals of the Guts and Glory and Knockout races at Vancouver, practice is going to play a big part of reaching it. It's a gradual process that we'll take one step at a time. Let's take every opportunity to make that push and start off strong at preseason!