http://www.dragonboat07.com.au/
September 17-23
While you guys were in SF (so sad I missed it!!!), I was in the Land Down Under racing with Team USA at the 8th World Dragon Boat Championships.

What is "Worlds"?
The World Dragon Boat Racing Championships, or "Worlds," is a race that occurs every two years where different countries bring together their best paddlers and compete in a series of races over four days. There are Juniors (under 18), Premier (18-39), Masters (40+) and Grand Masters (50+) divisions, each with a mixed, mens and womens team. Each team participates in 200m, 500m, 1000m (except mixed) and 2000m races to earn points toward the Nations Cup for each division.
Some of you vets may remember Brent Burns (Brent drinks!!) went to Berlin to race for Team USA's Grand Masters team in 2005. That was also a Worlds race, and many of the people I paddled with had been in Berlin too.

The Team
Last year, the USDBF held US Nationals in Tampa, FL in August. The majority of the races went to the Philadelphia Dragon Boat Association, and hence most of the USA paddlers came from that area. Team USA was a very strong team, and even included some Olympic kayakers!! After time trialing in San Diego, I was given the opportunity to be a part of the USA Premier Womens Team.

Monday - Wednesday: Practice
Team USA arrived at the hotel at noon on Monday, and 45 minutes later, we were on our way to practice (talk about hardcore). We practiced for an hour on Monday and two hours on Tuesday and Wednesday, working on blending and starts... and basically all our rest on the boat was "active rest." (Don't you guys want that at our practice??)

Wednesday night: Opening Ceremonies
Paddlers and guests from all the participating countries gathered in Paramatta to watch the opening ceremonies. This featured the usual lino dance and "dotting of the eye" ceremony as well as some Australian entertainment! 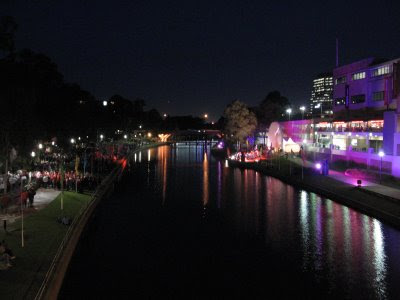 Thursday - Sunday: RACES!!
The racing was amazing! Each team had a different techniue, but the teams had a lot in common as well - perfect timing and perfect technique!! All the paddle angles lined up, entry and exit timing matched. These boats looked beautiful! Team USA did a fantastic job, winning the PREMIER NATIONS CUP for earning the most points across the mens, womens and mixed races in the Premier division throughout the weekend!
The Future:
US Nationals 2008Next year, US Nationals will be held in LONG BEACH!!! There's going to be some very competitive racing going on, and I'm excited we'll have some as-close-to-professional dragon boat racing right at home!

SPACE DRAGONS DOWN UNDER!