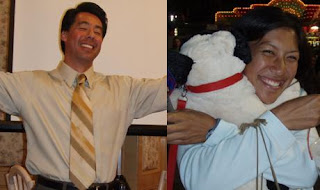 Hometown?
Emily: Los Angeles, CA. I remember in college, people were amazed that I actually lived in LA city because pretty much everyone who says they're from "LA" is from a suburb.
Joe: Born in Montebello, Ca... raised in Huntington Beach

How long have you been paddling for?
Emily: Since 2003. I started paddling in Seattle, then paddled some in Boston, before I finally settled in LA in 2004. I feel like because of that, I have been lucky to have learned several different techniques from the beginning and experienced different coaching styles.
Joe: Since we were originally called "Water Dragons"... Pearl, how long ago was that???

Why do you paddle?
Emily: Lots of reasons. It helps me unwind, and it's a great competitive outlet. I like the routine of having something to do on the weekends. But, it's the fact that our team is such a family that really makes me look forward to it every week.
Joe: Started out enjoying a different kind of workout (rather than the typical treadmill, stationary bike, weights, etc)... now enjoy watching everyone suff- err… I mean build their endurance, watching the team get better each year and seeing how individuals make great strides in improving their personal health!!!

Are you a better Paddler when you are Happy or Angry?
Emily: Angry for sure. Anger -> Aggression -> Kick the water's ass. I'm ultra competitive, so I'll just imagine I'm racing against my nemesis and that motivates me to push harder.
Joe: How about we just say "I'm happy I didn't have a heart attack at the end of a race!!!"

Favorite or notable Space Dragon moment(s)?
Emily: Too many...
- John's P-speech in Big LB last year
- Making it into Divison 1A in Big LB last year
- Seeing little ice balls of hail on the boats in practice one morning
- Geo screaming "who's f-ing old now?!" to a college team we beat in Vegas
- Joe and Wade and their emotional moments
- Feeling the mens boat slowly tip over in SF last year, and subsequently getting to watch a race from the chase boat
By no means are these the best, just a selection of the many fond memories I have of being on this team. =)

Joe: There's a lot of moments - here's just a few:
* Vegas, half the team was wasted BEFORE the tournament - this started the policy of "Joe Says No" (or was that Ceez asking the infamous question, "can we full around before a tournament???")!!!
* I'll just say 2007 Long Beach was a great moment (Editorial note - TEAR!)
* Pearl (steering at the time) flat out would NOT follow my directions and everybody needed to go to the restroom - what the hell was up with that???!!! That practice led to SD/LARD throwing Yonnie and I a "Congratulations, surprise marriage party" - Thank You!!!

How do you prepare yourself for a Race?
Emily: Rest a lot the week before, eat healthy and drink lots of water. The night before I try to sleep early (though usually I can't sleep since I'm so excited!). I really like our mental drills because they help me focus. Once I sit in the boat, I'm all business.
Joe: Anything I can do to keep from having a heart attack in a race.

Any hobbies, activities, interests outside of paddling?
Emily: Again, too many. I love pretty much anything outdoors, especially backpacking and camping road trips.
Joe: Working out (when I can), movies, used to play taiko (Japanese drums) - hope to go back one day.

Any advice for new Paddlers?
Emily: Stick with it. We've all been there, through the days of soreness and the awkward motions. Practice is really early on Sat/Sun morning, but it's totally worth it.
Joe: Prepare to suff- err…(darn, there's that word again - sorry), I mean have fun, enjoy the camaraderie - the workouts can be a little tough but the coaches will do the best they can to help you, plus you have the whole boat encouraging you to "hang-in there".

Paddling-wise, any particular goals for yourself or the team?
Emily: For myself - I have started working out at the gym instead of just relying on regular practice. My "reach" goal is to be good enough to make it on the Premier Mixed boat on Team USA for the World Championship race in Prague this year, though my more realistic goal is to make it on the Womens crew. For the team - I still can't believe we made it to Division 1A in Big LB AND Comp A in SF last year. I am so so so proud of our mixed crews. So, my goal for this year is for our Mens/Womens/Masters boats to represent as well!
Joe: To bring out the absolute best from the team and put on the line… and win or lose, they still know how to have a good time - the SD way!!!

If you could change one thing about the Team, what would it be?
Emily: Easy. Practice would never start before 9am. =).
Joe: Maybe we could try and leave the "fist of fury" home!!!

Favorite part about being a Space Dragon?
Emily: I love that we have so much fun both on and off the water. I can think of no better way to end Big LB every year than by hanging out at the beach until we get kicked out.
Joe: Just enjoy watching how this team has grown (in and outside the boat)… plus we have the BEST LOGO out there!!!

You have a single brother or sister. What Space Dragon would you consider hooking them up with?
Emily: The two sexiest Space Dragons - Tran and Galen!
Joe: Sister's married… brother, single, but won't hook-up with someone who gets up that early to go workout - sorry ladies.

Most interesting character you've met through the team?
Emily: Devant. He's always so upbeat, positive and enthusiastic, and I love the hair style!!
Joe: The Poi Pounders (Ceez, Deej and whoever else they brought) they brought a whole new personality when they joined the team.
My initial reaction - "God help us"… to "Thank God we have them on our team" ;-)


Who got you into Space dragons/Dragonboating?
Emily: In college, one of my friends, Andy So, was telling me that he joined a dragon boat team in NYC (Metro Athletic Dragons). I was really into Lion Dance at the time, so dragon boat sounded like a similar way to stay connected w/ my Chinese culture. When I interned at Microsoft in Seattle, an email was sent out to the intern distribution saying they were putting together a corporate team, coached by some folks from Hot Sake. I joined that and had a great time. Then I saw dragon boats practicing outside my window on the Charles River in Boston and ended up paddling w/ an MIT team, coached by paddlers from the Dragon Boat Club of Boston. By then I figured out that everywhere must have dragon boat teams, so I Google searched "NGST dragon boat" before I even moved out here and out popped Pearl's email address. I started paddling w/ Space Dragons before I even started working at Northrop.
Joe: An acquaintance from TRW… got a call in the middle of the day, asked if I would be interested in paddling for tournament in Long Beach… and the rest is history.