You wanted it, you demanded it, yep it's the return of the SD calendar and, yes, we are still taking money for it.


Here at Space Dragons Headquarters, we are all about equal rights and equal opportunities for all. We turn a blind eye, be it someone's ethnicity, gender, sexual preference, hairiness... 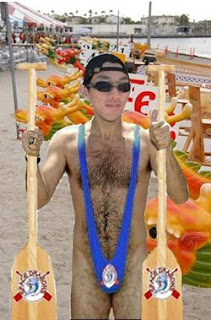 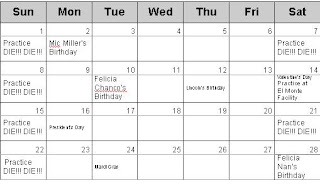 Here is Mr. February's, A.J. Chan's, take on Dragon Boating:
“When you aren’t doing it, it looks so nice and serene. But when you’re doing it…it (expletive) sucks!!!”

We may have overheard A.J. say these wise words:
“It is important to breathe during a race. When I focus on my (lead) strokes, I paddle hard and I breeeeeaaaathe. When I race, I am an animal….under control!!”

Yes ladies, to answer the question burning in your mind, this manly man, besides being constantly mistaken as Janet's other half, a voracious appetite, and difficulties in seeing green flags against a green backdrop, AJ Chan is SINGLE and is AVAILABLE.

If you would like to meet Mr. February - Come to a Space Dragon practice near you!

(actual document has been uploaded to: http://rapidshare.com/files/199965319/Mr__February_Final.rtf)