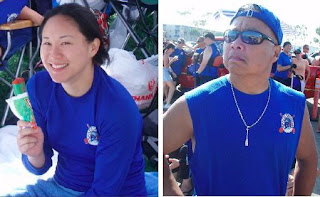 How long have you been paddling for?
Janet: technically since Oct 2005, but I was out of the country for most of 2008, so this is my 3rd year...
Caesar: My first tournament was the 2005 Long Beach Tournament. I will be participating in my 5th season.

Why do you paddle?
Janet: Because I need the cardio workout - and the SD family is just so amazing that I paddle just to see them!
Caesar: Bad legs made me leave my beloved Poi Pounder softball team. I find the physical intensity of paddling very appealing. I love the fact that the sport combines strength, endurance, stamina and grace. When I better myself physically, it is for me as well as for a collective effort. I think I’m addicted to the muscle aches associated with paddling.

Are you a better Paddler when you are Happy or Angry?
Janet: Angry Competitive.
Caesar: Happy. My personality is fueled by fun and laughter.

Caesar: Many favorites. (May need small font for all these).

How do you prepare yourself for a Race?
Janet: I try to calm down from being overly anxious and nervous - so I usually look like I'm about to fall asleep in between races =P
Caesar: try to paddle to failure every practice. During the days to come, I get rid of the weights and work the fast twitch muscles. I also try to get some cardio in. Race day, I would do mental drills and look for landmarks to know when/how to expend energy during the race. Then I go to my hotel room, dress Deej in a muumuu and abstain. Because, “JOE SAID NO!!”

Any advice for new Paddlers?
Janet: It hurts...it really hurts when you first start (and still hurts). But things get easier...and then it's like riding a bike. It'll come by naturally and you will never forget it! After being gone for a year - I was surprised at how quickly (I think) I picked it up again.
Caesar: First, learn to survive the practices… so you can learn to survive the races. Then, master yourself during the practices….. so you can master yourself during the races.
Be a student of the sport. Always give an honest 120%. Critique from coaches on your technique is never personal (no matter how many times) and more important, make dragon boating fun anyway and anyhow you can.

Paddling-wise, any particular goals for yourself or the team?
Janet: To grow competitively but still maintain our team's laid-back and happy-go-lucky friendly attitude. I think this is what sets us apart from all the other teams out there.
Caesar: Team wise: I’d like the Space Dragons to be known in the Dragon Boat community as a top level team that works, competes and parties hard!!

Self: Try to have a “Bruce Lee” body like John Lai’s or a muscular build like Joe. Or to have freakish strength like Rod or to have incredible paddle power to weight ratio like Wade. Oh, and have delts like Emily. Any combination of the aforementioned paddlers would be nice.

If you could change one thing about the Team, what would it be?
Janet: Not so far practice location and later practices - I like to sleep in! And everyone can travel more together!
Caesar: The best change has already happened. When we got rid of the white Space Dragons uniforms and replaced them with the sacred Royal Blue ones. The white uniforms did not compliment people with spare tires, muffin tops and bra fat very well….especially my spare tire!!

Favorite part about being a Space Dragon?
Janet: The people - I missed everyone terribly when I was gone for a year. I've never met a group of people that have so much in common - love of the outdoors and exercising, off-the-water activities, fun, friendly, comfortable. It's like my 2nd family!
Caesar: It has grown to be a close knit team. We always give hugs when we part and we rarely have drama. At least that I know of. The word “LOVE” is everywhere. We are just ….Shiny Happy People.

You have a single brother or sister. What Space Dragon would you consider hooking them up with?
Janet: I have both, but they're not at the point where they need to be set up! Lil Lui is already on the team - he can find a girl himself! As for my sister - she can handle her own =)
Caesar: Question is, would any Space Dragon want me as their father-in-law???

Most interesting character you've met through the team?
Janet: Mayana - She LOOKS so quiet and sweet...so the things she says and does sometimes just makes me laugh uncontrollably because it's so unexpected
Caesar: I think this heading should say “CHARACTERS”. Everybody adds a certain flavor to the team. I believe nearly half the team should be committed to a mental institution. Here is the top ones.

Any interesting facts about yourself - or secrets that you want to divulge?
Janet: I can paddle for miles nonstop..but I can't even run a mile w/o stopping. No joke - ask Pearl/Emily - they thought I was being modest for the Mud Run.
Caesar: Okay, okay. I think I like coaching newbies!! I’ve learned to love seeing newbies paddle like crap at first and then see them look half way decent by the end of the day. Then they think, just because paddling with Coach Ceez was fun it’ll always be that way. They pay their fees and end up in a boat with coach meanies like Joe, John, Emily and Wade. It’s like leading cows to the slaughter house!! LOL!!

Who got you into Space dragons/Dragonboating?
Janet: Emily. And how I met her is a bit complex - but I'm glad I did!! AJ and I actually missed our first SD practice and paddled with LARD...but we went still went back to SD for the 2nd and 3rd and well..we're still here. PS - Contrary to popular belief, AJ and I were not an item back then!
Caesar: Susie Rodriguez. I joined the team just so she would stop harassing me and it was the only way to get her to “Sharrup!!” LOL!! I’m glad she introduced me to the sport.

Is Galen a hottie?
Janet: Serious????! Galen's a really great guy =P
Caesar: Galen can be my cellmate anytime!!