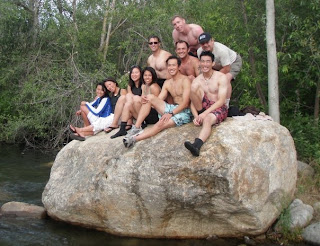 We started the weekend with a nice and refreshing dip in the Kaweah River after the long drive there. Mayana made a very tasty meal of spicy beef rendang, rice, and veggies – Thanks Mayana!. 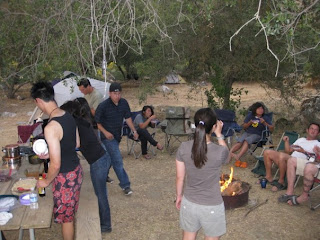 We all sat around the campfire, participating in a variety of activities such as playing uno, making a foldable table collapse and crack (Sammi), getting locked in the bathroom (Tran), arguing about who can drink more (SD women vs. men), popping corn, and making smores. Kenny also developed a habit of recruiting single white men (which were all white water rafting guides) to join the party.
The next morning, the crew woke up to a delightful breakfast of eggs and bacon created by Chef Jason. Robert went down to the river eddy and attempted to get some bites from the stubborn fish. I think he caught a small one? A couple of people took a post-breakfast nap to rejuvenate from the previous night’s debauchery. At around 9:30, it was about time to suit up for the white water journey that would soon come. Coincidentally, we found that a couple of LARDIES would be joining us for rafting. We stood listening intently to the interesting safety talk before driving up the hill on a bus to our starting point. Space Dragons took up about two and a half boats, while LARD filled three. 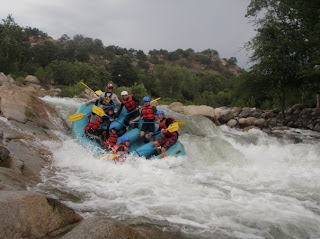 About half of the team fell victim to the perilous plunges into the icy cold water (Janet, Kenny, Tran, Jason, Marty, Colleen, Ing, and Wade). Captain Wade held the day’s record by falling in 3xs. The team ended the rafting adventure by competing against LARD with some races and dunks (go figure). However, there were some friendly fires including Kevin Mak’s demonstration on how to make a perfect tackle (sorry, Jason!), and Wade dunking Princess Pearl. The crew arrived back at the campsite and enjoyed more evening swimming in the cold river. Dinner was prepared and consisted of burgers, raw sausages, chili, and grilled corn (yum!). As it grew dark, a group of us decided to take a nice walk down to the ice cream shop (which we knew was closed). On the way, we were acquainted by a couple of lovely critters (dead snake and bird). The campfire that night was not as enthusiastic as the one before, but still amazingly entertaining. There was a lot of talk about music and more uno. Kenny continued to introduce single guys to the team, and Wade started to take pictures with a couple of unattended cameras ^^. 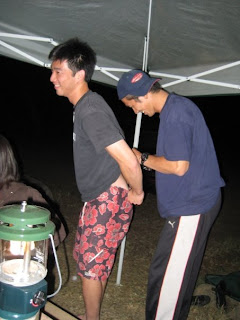 Jason again woke up early and cooked a delicious raisin pancake and sausage breakfast. We said goodbye to the Kaweah River by body rafting down to our campsite’s eddy twice (Kevin Mak: “I’m ready to go be stupid again.” Sammi: “Me too!”). After everything was packed up, we all raced down to the ice cream shop for some sweets to conclude our camping trip. Wade and Jenn arrived first to relish the refreshing taste of a cold sundae. After all of our stomachs were satisfied, we all hugged our goodbyes and parted for the trip home after an awesome weekend at the Three Rivers Hideaway campground. 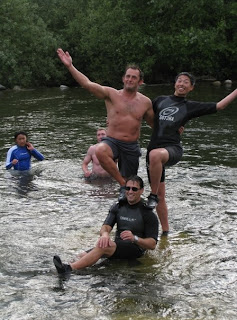 I want to give thanks to all the organizers who put this trip together. From Janet to setting it up, Robert, Mayana, and Tran for getting our food, to all of the chefs, the drivers, equipment suppliers, and lemonade providers - Thanks for such a great weekend. I had a BLAST! 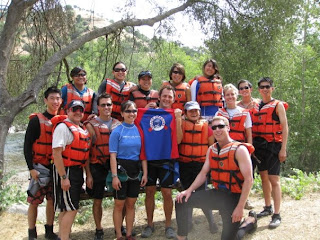 Thanks Sammi for such a great writeup! Made me want to miss my wedding and join you guys. Next year, there is always next year :)
Posted by Galen at 6/10/2009