Since I wasn't there, this past Saturday, my kayak writeup would have consisted of:

Kayak challenge was fun!
You should have been there!
These are the pics!
Emily and Brian won!

Luckily Davin is THE FREAKING MAN. (I hear he would have whomped on the winners if he new the race format ahead of time and that he made Princess Pearl sweat on practice on Sunday and he knows Chinese. As I said, he is THE MAN....watch out Russ there is a new mancrush out there!) Anywho on to his write up... 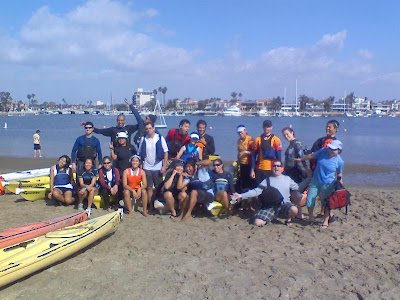 After a tough practice involving the honing of the new stroke technique several Space Dragons chose to strain their backs even more by taking part in some recreational and competitive kayak paddling. With teams formed, waivers signed, fees paid, and the rules speech unlistened to. The Space Dragons took to the water and made their way through the lovely Naples Island bumping and grinding the whole way.

Afterward the races began, the first being a test of endurance (long ass race!), the second a test of speed (short race!), the final, a guts and glory with a counter clockwise turn (or in Allan and Tran’s case, a clockwise turn) around a buoy. Speed, strength, and ability to come back after colliding with another kayak were all tested.

Final congratulations go to Team Brian and Emily who took away the title of 2009 Kayak Chmapions. And thanks to all those who gave up paddling competitively to help run the races and take pictures(Ceeez you my hero!).
Following the races a feast at Ruby’s ensued where such things as the merit of garlic fries and Tabasco flavor took place. A wonderful Saturday and a lovely way to welcome back scheduled practice times. It’s good to be back :-)
Posted by Galen at 11/18/2009