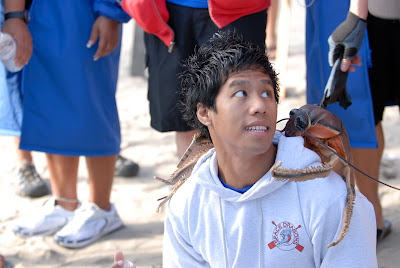 It was that time again, when all the locals come out for what's been unofficially dubbed the "Baby Long Beach" tournament. This is where everyone sizes up the competition; see which team has improved during the off-season and which are credible threats to future hardware aspirations. 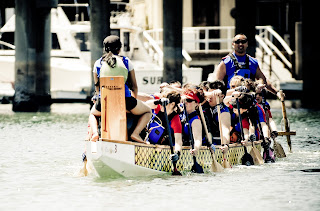 Like previous years, there was some seriously stiff competition. I'm talking about neck-to-neck surging towards the finish line. And not just that, either! Imagine, if you will, racing so damn close that you actually clank paddles! "Wait", you're probably thinking now, "that just means you're off timing, you dummy! Don't forget to look up at your strokes!" But no, my dear friend... I mean clanking paddles with boat in the next lane. That's right folks, we were so close you can see the whites in their eyes. The boats were lined up so close that the engine room paddles clanked - but even that does not break our concentration and focus. And it was not just that particular heat, at Baby Long Beach we participated some of the closest and hardest racing ever against neighboring teams such as the blazing Electric Dragons, those killer Killer Guppies, and the beloved in-laws LARD (just to name a few)!

Our Space Dragon tent was seredipitously right in front of the 200m start line. And though I've experienced that jolting, ripping Space Dragon surge at the start many times on the boat, watching it from afar proved just how unbelievably powerful the infamous Space Dragon start truly is. Indeed, watching our Blue boat from the sidelines, you can see the jump our boats get on our opponents. While there is much excitement at the finish line, this is definitely something I recommend that all paddlers watch sometime at a tournament! 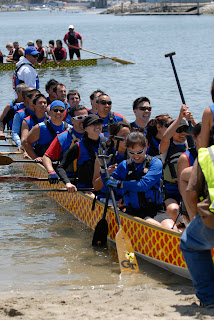 But I digress; onto the results! Each of the 500m and 200m races only had one division (Mixed); therefore, every heat was effectively racing each other.
In the 500m races, the ROBUST RED team came away with the fastest time of the day for the Mixed Division during the Semi-Final race at an astounding 2:22.62 with a wicked crosswind, nearly a full second faster than the second fastest time of day in the division. Major props must go out to our talented steersman, Russ, for keeping the boat out of trouble, and to each and every one of the paddlers, for keeping the focus in the boat and running our race without regard for the chaos surrounding us. The BOLD BLUE team raced a hard race against some tough competition and just narrowly missed getting to the Semi-Finals.
The afternoon consisted of the 200m races, where we find our ROCKETING RED team once again coming away with the fastest time of the day for the Mixed Division with a mind boggling 00:50.57! The BIG BAD BLUE team killed it in their seeding heat, coming in first by a quarter second! They just missed getting to the Finals but was able to take a very respectable second place finish in their Semi-Final race against the A-squad of one of our local brethren.

Special Thanks goes out to:
-- Dr. Chen, the Association and all of the volunteers! It is their dedication that makes all of this possible.

-- CJ, for organizing the potluck, managing the equipment and the entire tournament for the team, and for being an all-around awesome dude.
-- Callers and Steerspeople, for setting us on the straight and narrow and taking on the most difficult jobs on the boats.
-- All of our teammates, for bringing equipment, bringing an overabundance of food, paddling like hell and always having a good time.
-- Wade and Jen, for letting us decompress in your beautiful house! 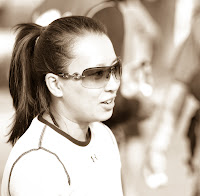 -- First time paddlers: Hilary, Maru, Barbara, Tina, Monica, Nick and Jeff. The newest round of suckers to join the team!

Closing Thoughts. While I may wax poetic about close racing, adrenaline rushes and winning medals, the real highlight of my day was hearing Louise and Lil Tran talk dirty to me. Ok, it was to the entire boat... but I was so focused on my Caller and it was just like they were talking only to me!
What was your highlight?