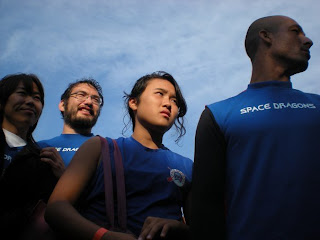 Space Dragons, ever wonder how you got here? Why you're standing on a beach at 7:30am on a Saturday morning, freezing your butt off? Perhaps you're not quite sure why the pain is so enjoyable? Well, let me tell you a little story about how we all got here.

The story that you know and love may begin in 2002, when the Space Dragons first formed. If you don't, read about it on the blog here. However, real story takes us back approximately 2,500 years, to ancient China. It all starts with a man named Qu Yuan. Qu Yuan was famous patriotic poet of the time, and was a beloved and popular figure. 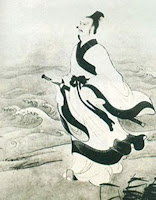 Our story is set during the latter part of the Warring States Period (in the 3rd century BC) in China, when seven individual kingdoms competed with each other for hegemony. Qu Yuan lived in the Chu kingdom, and was a trusted advisor to the king. He advised the king against the allying with the Qin kingdom, the strongest kingdom at the time. Sadly, the king's other advisors, fearing the loss of their power, made false accusations against Qu Yuan and had the king exile him. It was during his years in exile that he wrote some of the greatest Chinese poetry expressing his fervent love for the Chu kingdom and its people.
In the years that followed, the Chu kingdom would be overtaken by the Qin. Upon hearing his beloved state was captured, Qu Yuan was in great despair and distress, and in his desperate state, committed suicide by drowning himself in the Milou River. 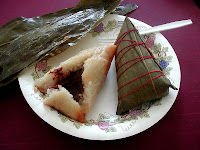 Citizens, upon hearing of his suicide, quickly took to their fishing boats and raced to rescue the poet. Unable to rescue him or find his body, the local villagers dropped rice into the water in order to feed his spirit while beating on drums to scare away the evil spirits. But the fish in the river ate the rice before Qu Yuan could get to it, so in order to ward off the fish, villagers began wrapping the rice in silk. Today, we wrap sticky rice in reed leaves and call them zong zi.
Over time, eating zong zi has become closely associated with festivals and celebration. Meanwhile, the art of racing boats to search for Qu Yuan's body gradually became the cultural tradition of dragon boat racing. To celebrate Qu Yuan, Dragon Boat Festivals are traditionally held on the fifth day of the fifth month of the lunar calendar, which falls on June 16 this year. A large internationally reknown Dragon Boat Festival will be occuring in Macau this week. And yes, Wednesday night practice paddlers, you will be paddling on the day of Duan Wu Jie (literal translation: "Solar Maximus Holiday"; generally translated as "Dragon Boat Festival" ). 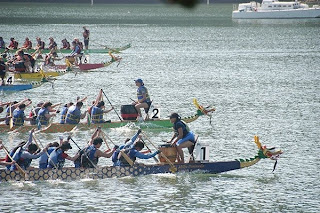 And so now when someone asks you why you paddle, you can tell them it is to celebrate one of the great ancient Chinese cultural icons, Qu Yuan.
As for me, this week I will be eating lots of zong zi!
source: my mom and dad. There are other variations of this legend but essentially the story is the same. And now you know. And knowing is half the battle.
Paddles up!
rajaree
Posted by rajaree at 6/15/2010