Looooooooooooong Beach: fun in the water (with pictars!) 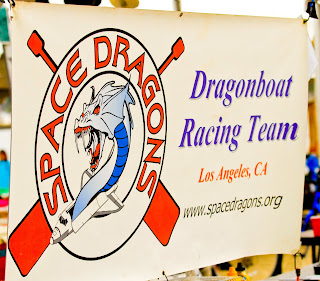 Hello. This is your captain speaking. On behalf of your paddling crew and coaches, let me welcome you to Space Dragons Airlines Flight 2010-2011 to Awesometown with continuing service to San Diego. We should touch down in San Diego on October 23 for our season closer. Look out for upcoming recaps of Lake Gregory and San Francisco too though!

Folks, we just hit our cruising altitude of spec-freaking-tacular thousand feet. I’ve turned off the seat belt light, which means you are now free to move about the boat. However, for your own safety, please listen continue listening to your steersperson, in case we encounter any unexpected turbulence.

Ladies and Gents, this season has been quite a ride, hasn’t it? Let’s think back to July 31, Big Long Beach. At our home tournament, the Mighty Space Dragons pulled together and came out in force. Not only to paddle, but to play host to the GG Dragons from Canada and our lovely sister team, Ripple Effect from San Francisco. GG Dragons were so appreciative that they asked us to come up to Canada to compete so that they can return the favor!

But I digress, our Space Dragons had a busy weekend. This was a weekend topped of with our Masters furiously and proudly paddling their way to a bronze medal, a clear 5 second ahead of the 4th place finisher!

But wait, there’s more! Not only did the Masters bring home hardware, but so did our newbie White boat! Proving their mettle, our White boat came away with a hard-fought silver medal in Division IIIAA!

Blue boat – oh my, what can we say!? Talk about warriors… talk about not settling, running until empty and then running some more! Perhaps their hard work was not recognized by a medal, but let there be no question – the heart displayed by the Blue boat was not lost on the team or our leadership. Against the odds, Blue boat qualified in Division IIA and faced Red boat in the Finals.

Red did not disappoint in Division IIA. Though Red showed brother Blue (or any of our competitors, for that matter) no mercy in the head-to-head Finals, Red powered its way to a first place finish, bringing home the Gold.

So yes, plenty of medals were won in Long Beach. And yes, Space Dragons come to compete and come to win. At the end of the weekend, the entire team was in high spirits; lots of love was felt throughout our tent. 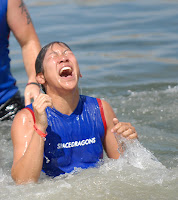 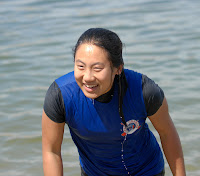 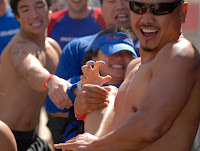 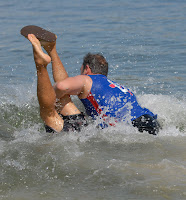 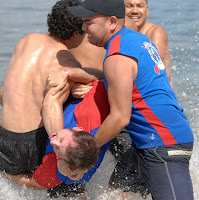 *unless you are Tran. In which case a death stare will scare everyone away.
Think you got fight in you? Think you can fend off determined dunkers? Who you foolin'? These are Space Dragons! These are Warriors!
War wounds are just something we brag about - ain't nothin' to fear!
So watch out, because I have a feeling there'll be more of them at the next tournament! 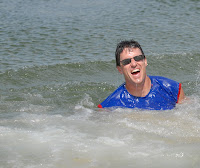