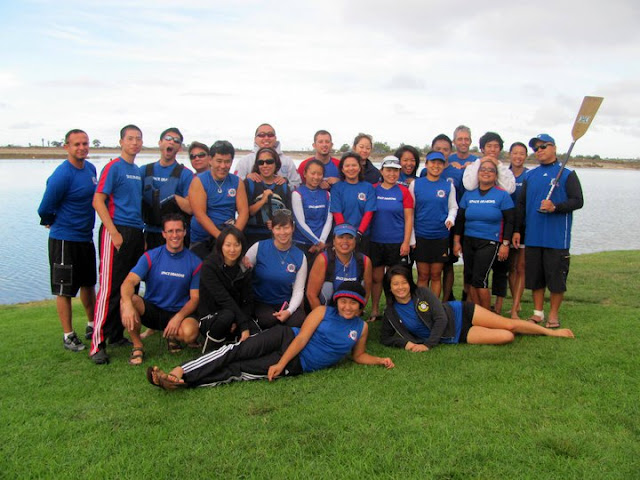 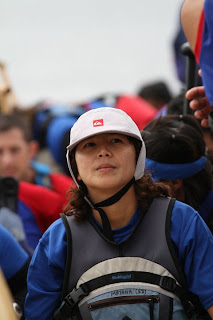 For one last time in 2010, the Space Dragons gathered to embrace their SD brethren in the spirit of fun, community and competition. The location? San Diego! The competition? Fierce! For the race organizers, it was a chance to revive their annual competition, and for us it was one last chance to hit the water hard and to close out a long and hard-fought racing season.

Not only was the venue new, so was the format of the races. Yes, there was the requisite 500m Mixed, Collegiate and Genders in 20-man boats, but day 2 had something very new to the West Coast: 10-man boats racing a 250m course. Yes, Mixed and Genders divisions pulling super-sprint 250’s, and for ca$h prizes!!! 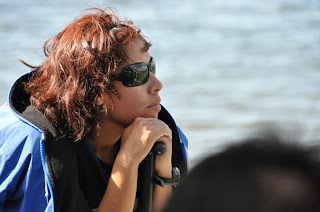 The challenge was real! Our crew was small and with a lower than optimal men count, meant both a heavier boat in the 20-man races, and A LOT of racing in the 10-mans with the same crew being entered in mixed, open and women divisions.

Saturday started out EARLY with a 6:30 call-time to get setup and attend meetings even though our 1st race was not til 10a or later, but the SD crew was on-site on-time, getting our site setup quick and the food out so the crew could POWER UP. Lots of quality food items showed up, one after another: fruit, eggs, bread, bagels, milk, juice, yogurt, and on and on!

It was cold, cloudy and soon a heavy drizzle blanketed all, attacking the tent-huddled crew by collecting on the tent tops and releasing between the tents on unsuspecting teammates. One nice thing about the overcast is that it kept the notorious SD wind down to a light breeze. 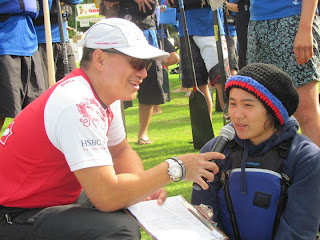 Then off in the distance was a familiar voice to most of us…. It was coming over the announcement speakers, but it couldn’t be, right? Wait … It is! … It’s our favorite marshalling and racing MC from the North … Puppy!!! 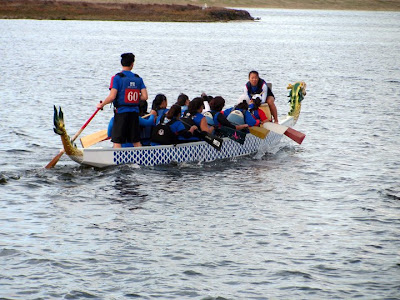 Finally after hours of waiting in the cold and wet, it was time to race 500s! We loaded on the boats in 4 lane heats and ran our races. 3 for the day in the Mixed Div I, and the races were hard! The air was wet and the boat was heavy, as was the competition which included a lot of familiar faces from LB, AZ and SF along with some new faces from local outrigger clubs. Our first heat was a mess!!! We could NOT hear the starter, missed the start, and just had a generally meh first run. OK, 1st race out of the way, on to the next ones. In our final heat we were with some familiar company, as in 2 LARD boats, us and a WA team. It was a good heat, the result of iterative improvement from the 1st 2 heats and we hit the start hard! Pushing right into the lead with 1 of the LARD boats, we ran neck and neck to the end finishing just behind the faster LARD boat. Mixed Div I Consolation 2nd place. Yes it is a familiar place, but a strong finish considering the competition, and a good reminder of where we have room to improve. But it’s not over there is still Sunday and 9 races to compete in!

A special thanks goes out to Susie for organizing Subway sandwich platters for those that wanted something more solid. They fed hungry bellies for 2 days! 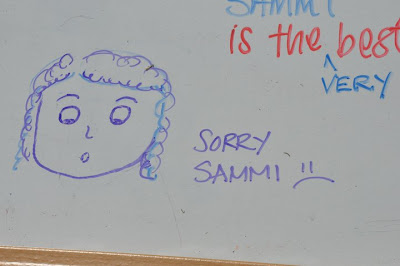 Sunday started just as early, but on this day the races started around 9 and the SD Ladies started off the day with a bang! More on that later… 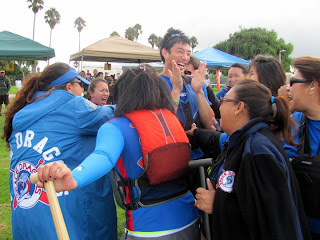 This day also brought with it some relief for our wearied crew. We were joined by Kim and AJ to fill out the mixed and men’s boats along with AJ’s steering prowess to allow our only other embattled steers, ‘Scottie Too Sicky’, ‘Sammi the Great’ to get some paddling time. Also, we got 2 fresh callers with ‘Tran the Conqueror’ and ‘Felicious’ joining the crew. 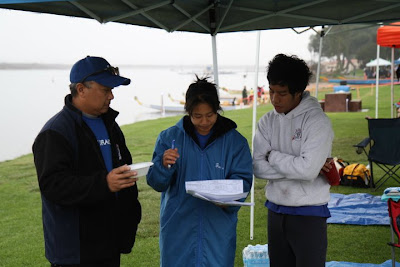 Before I get into how awesome our crew performed on Sunday, let’s not forget the challenges of keeping this train running. To this point, the coaches: Jackie, Ceez and Devant have been working and reworking the seating charts from Fri morning to now and into the rest of Sunday races to maximize team participation and effectiveness due to paddler illness, soreness, weather and boat conditions all on top of a very ‘fluid’ event organization. Give each one a BIG hug next time you see them!!!

Today was CRAZY! The SUN was out, but along with it came that WIND. It started as a head wind, then shifted to a tail wind which blew clouds back in for awhile before settling in as an offshore wind making a side pass across the course ( LIKE LB >.< ) This played havoc with starts ALL day with boats losing control during races, collisions, OH SHAT! starts, etc… It was like NASCAR for dragon boating =p 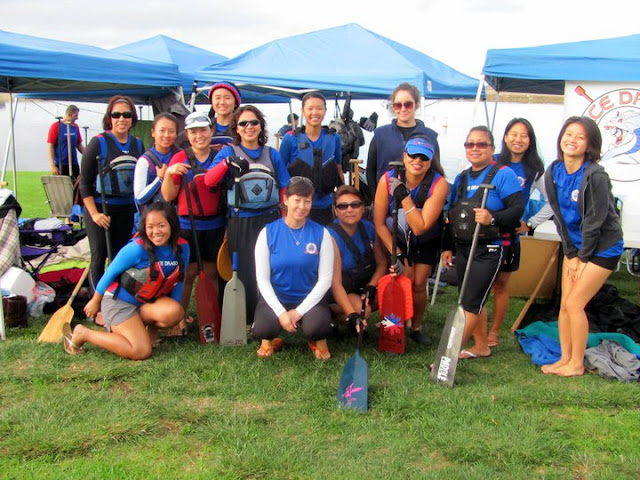 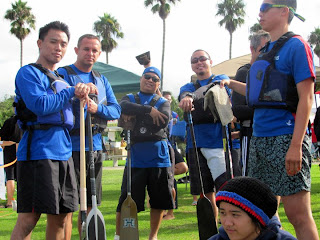 The men fought hard against ‘stiff’ competition ending up in the Consolation round with Guppies and Rogue and a 2nd place finish just 2 seconds off the Championship 2nd/3rd times! (8th over all) in the CRAZIEST race of the day in which we became a “Space Dragon Sandwich” at the Finish line with boats on either side converging on us as ‘Sammie the Fearless’ guided the boat to minimize impact as the 2 boats pushed all the way in to the gunwales!!! 3 boats as one as we all grabbed each others’ boats and kept stability. Thankfully the only casualty was our lovely drummer Felicia’s finger and a little blood. 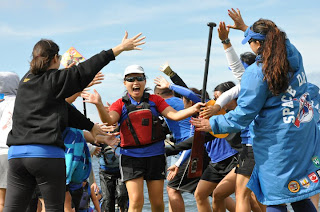 The 10-man Mixed boat had a tough ride with each race following a women then open heat, fatigue was certainly a factor, though they pushed through it, finishing with a strong 1st place finish against BAD2 and Club Sake to 10th over-all showing. 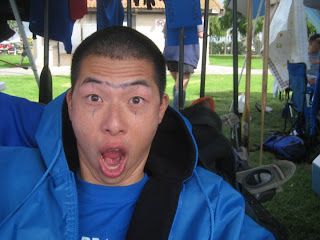 Now it goes without saying that as Space Dragons, sitting around doing nothing while waiting for our heats is not an option, rain or shine! What things might you have seen? Playing taboo during the “rain” (thanks Step ‘socow1’) Men kicking Ash!, Devant’s snaps, dance circles, pole climbing, boys wrestling, cheerleading pyramids, face painting sleeping Kmak, yoga warm-ups, head stands, cartwheels, jumping in the air, attempted parachute trampoline, needless sunscreen, race heat MCing for Felicia and JamesN (thanks Puppy) and even some homework .... 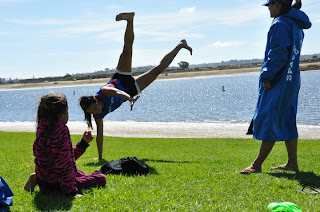 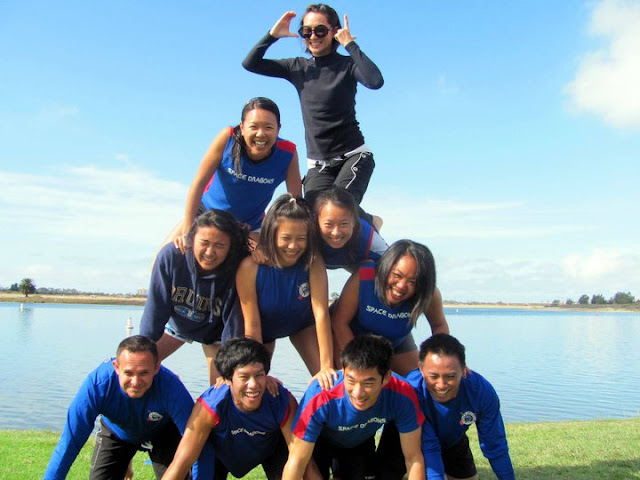 With every group ending with 1st and tight 2nd place finishes, we all finished the weekend on a high-note, with an eye on next season, what a great way to end the season XD
Posted by devantosaurus rex at 10/30/2010