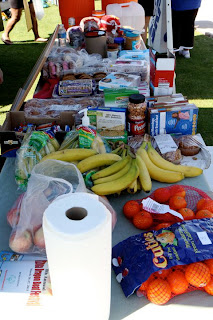 If there were any "secrets" about what those Space Dragons are on and how we do what we do, I'll go ahead and "give all [our] secrets away" on this post! But first, a word on the stage and how it was set for our SD peeps who missed out...the season opener came along with calm AM winds, perfect sunny 70s highs, and our usual brand of Space Dragon energy. More uncommon to our SIXTH showing in Tempe was the ritual set-up of tables and chairs before our first circled warm-up. From mouthwatering fruits galore to scrumptious carbs, each table was lined with an array of energy-dense food--each morsel made possible and brought by our own SD brethren. The energy was charged, Space Dragon tattoos and sunblock applied, Space Roach N' Fist perched and ready, WE were ready!
The Space Dragons assembled early before the first heats of the day to the circled warm-up. The sea of blue from the SD invasion was apparent as Coach Em rallied everyone to the huddle on our objective for the weekend.

"We have worked our @$$es off...My goal is to not waste that effort. I don't care if we get hardware. I don't care where we place. What I want is for everyone to step off of every race heat and feel like they've put everything into that heat." 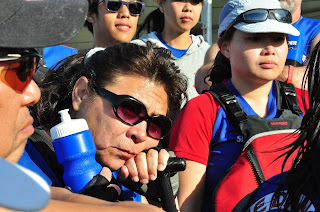 From then on, we looked into each other, nodded recognition for what we had in front of us, ran our game, and didn't look back!
Before you could say "fist of fury" the races were on the way and so was the weekend! With little room for dilly-dally many races were slated back-to-back between 2 mixed boats for the 500m, 250m, and 1000m races in addition to a men's boat, a women's boat, and a masters crew. The race organizers did a great job keeping the weekend packed with race action while we fearlessly slated our crew to participate in 17 races over the weekend! While the weekend weather was dry, the sun draining, racing plentiful, keeping strong and focused on the game plan was the goal from the beginning and everyone executed beautifully!
Saturday exhibited some crazy exciting racing as RED took the stage first and showed how a 'no regrets' attitude along with hard work can pay-off by taking impressive 1st place finishes in both mixed heats--such results poised Space in great position and momentum into Sunday's races. SD BLUE would not go quietly either with close connected racing at only sheer seconds behind great tough competition from teams such as UCSD and LA Thunder Dragons (much props to you!). To be part of the pack this way shows loads of discipline and potential for growth as we looked at each other at the end of the day's debrief as if to say "HELLZ YEAH, we want more!"
Finally adding method to madness Space Dragons Women AND Men placed blazing fast heats alongside sizzling fast teams to qualify for the Div. A Semi-finals races! Such close races can only be appreciated when considering the all over high-level competition we faced in strong teams such as San Diego and Wasabi Power, not to mention local forces and powerhouses like LARD and DPW (just to name a few). Did I mention that both Men and Women placed overall top 3 to respectively take the Bronzes?! Not enough you say? That's what our Masters said after pulling the 3rd fastest time in the Masters division to secure the Bronze bling behind San Diego and composite Long Beach Masters. 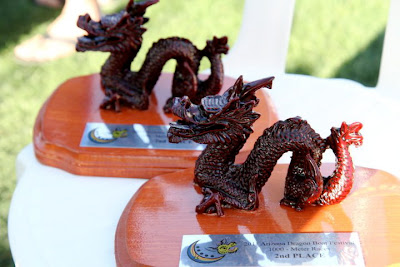 More racing highlights and results:
2nd Place in 250m Races
2nd Place in 1000m Races
3rd Place Mens Division
3rd Place Womens Division
3rd Place Masters Division
So is there an app for "awesome?" Well, it better be called the Space Dragons because our app is programmed with continuous hard work, much love, and SD energy! The way I see it, stepping off of our first tournament benchmark this season is both a blessing and a curse in disguise. Its a blessing that we've been rewarded for our hard work at home. Its a curse because now we know what we are capable of, and it can only be better and better. That means that we've gotta keep pushing for more work and never "get comfortable."
Big UP'S to: 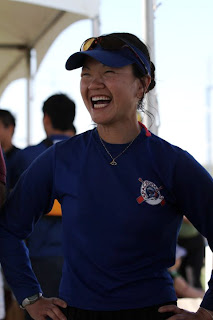 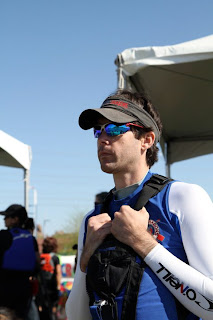 Steers PEARL and  BRIAN for grippin'  it   tight  and grippin' it right!

GREAT JOB to all of our first-time competitors and newbies: Ally, Rhommel, Emilio, Kevin, and Lindsey.  Welcome back to the madness Arlene, Diane, and Tammy. It's only going to get better!

SD NEWBIE QUOTE OF THE WEEKEND:
"I SO HAPPY!" -Emilio

Finally, for the stuff off the water you may have missed and will want to ask your fellow benchie as you make it out to next practice--ask Karen how she got Allan to take his shirt off (again!); have a chat with Big Steve about his 1000m ride; ask Emily who she thinks won the sumo wrestling match between Rod and Davin; check-in with Deej to see who she thinks looks more provacative, the SD MENS boat topless or Big Steve/Devant in a blue Tutu...


Oh and if you were wondering about what "secrets" I'm giving away, I'll state it here...What are we on? We're on the boats training our @$$es off every weekend. We're on the beach doing Rod's land and core workout. We're at the gym and the track hitting it hard!...What are you on?