Space Dragons Do Good for the Compton Initiative 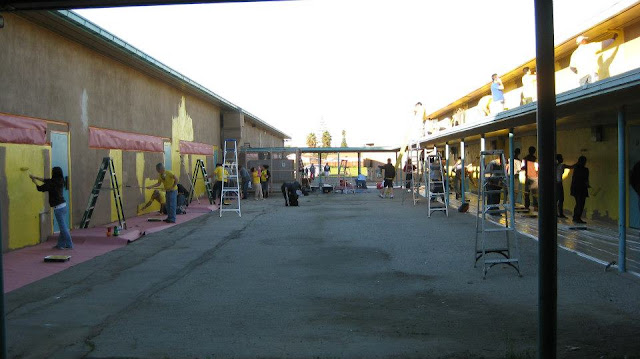 It was an early morning at Longfellow Elementary School in Compton, and the weather was hotter than Bruno Brunoing his pants after applying sunblock on the beach. While the SCDBC was split up into two groups to work on different sections of the school, our heroes in blue were armed with paint rollers, paintbrushes, and righteous painting power as paddlers from Space, Thunder Dragons, Killer Guppies, Splashing Flyers, LARD, Electric Dragons, Kaiser Permanente, and AeroDragons went forth after marshaling with a mixture of other volunteer groups to paint the elementary school a bright yellow. After painting for about 3 hours, with the help of the various organizations that also volunteered alongside us, the entire school had virtually been 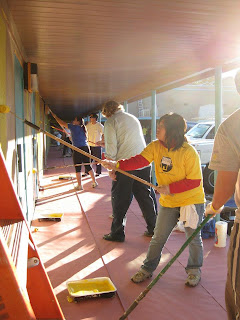 repainted and beautified. After seeing that, I felt proud to be there not only as a Space Dragon, but as member of the dragon boat community in general, helping all the other community service associations pull this off. While there may have been a few mishaps (a shortage of paint being the main one), overall when we were done with pizza afterwards (and some very sugary cookies which would have made our own Gracey monster proud) there was a sense of accomplishment and satisfaction in the air (or was
that the paint?). 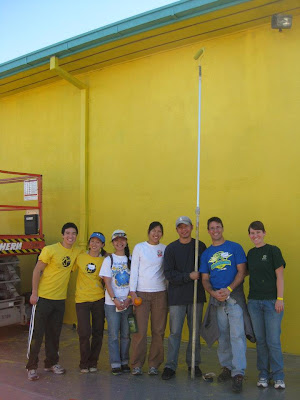 Working with people within the community was what it all came down to in the end. Being able to represent ourselves as paddlers to the general community in that respect is something that this Space Dragon was proud to do.

Much thanks to Brianne, Emily, Makiko, Robert, Debbie, Viet, Allan, Pearl, Makiko's brother and his girlfriend for putting forth your time to this worthwhile cause. Major props to Step for setting up the magic in this opportunity and proposing it to the SCDBC.