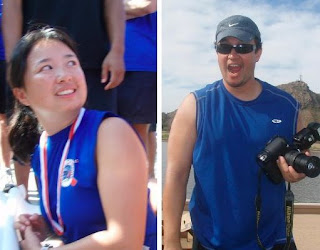 Hometown?
Tina: Sunnyvale, CA
David: I was born in Nakhon Sawan, Thailand. I moved to the U.S. before I turned 1, and pretty much grew up in the San Fernando and Santa Clarita valleys. My first job was ride operator at Magic Mountain.

How long have you been paddling for?
Tina: Summer 2004, all with the Space Dragons
David: Dragon boats since the beginning of 2008. I did a little kayaking in 2005.

Why do you paddle?
Tina: I can't seem to stop. I love being on the water and enjoying the outdoors.
David: It is a regimented way for me to get and stay in shape. It also motivates me to stay active off the water so that I can make my best possible contribution to the team and for my own health.

Are you a better Paddler when you are Happy or Angry?
Tina: Happy cause it's much easier to focus. The best races are the ones I don't remember paddling, only crossing the finishing line.
David: I'm in a zone when I'm paddling...you could almost call it emotionless. None of my problems get in the boat with me. Of course, I'm always happy to be around the team. This team won't let you remain angry or sad for long.

Favorite or notable Space Dragon moment(s)?
Tina: Flag catching in Portland last year, Gasping for air after paddling with the SD women's team during my first summer, Circle of love after LB races, and All the ski trips to Mammoth
David: - '08 San Francisco Men's Huli...the terrified look on Lil' Lui's face was priceless.
- One of our paddlers puking during practice.
- Making Comp 1A at Big LB as part of SD Red...definitely makes one feel better about all the hard work put into practice and conditioning!
- Joe and Yonnie's surprise celebration.
- These are just a few notable moments! Being on this team means that there have been many, and there will be many more to come!

How do you prepare yourself for a Race?
Tina: I try to get some sleep and then eat lightly until I'm done racing.
David: I taper off my workout starting about 1 1/2 weeks prior to a tournament. I'll start carb-loading about 48 hours prior, which doesn't mean "pig out" on pasta! Finally, I try to get plenty of sleep each night of the tournament and plenty of rest between races, running the race sequence in my head over and over again.

Any hobbies, activities, interests outside of paddling?
Tina: Traveling! So many places to see, so little time. In the next few years I hope to make it to New Zealand, the Narrows hike in Zion, Vietnam, Japan, Santa Fe NM, Arches national park, and England/Ireland/Scotland
David: Among my favorites, I love hiking, mountain biking, snowboarding, visiting places of local historical interest, listening to and making electronic music, and, as you all very well know, PHOTOGRAPHY! I was taking Jeet Kune Do (Bruce Lee's martial arts concepts) from one of his original students at IMB Academy in Torrance, but have moved too far away from that school to make that feasible now. I also love tennis, but it's been hard finding people to play with or places to play for the past few years. :(

Any advice for new Paddlers?
Tina: It's frustrating at first but it gets easier. And don't worry, some of the vets need naps after practice too.
David: I won't sugarcoat it: You're gonna hurt for a couple days the first few times you come. But stick with it...the pain will lessen, your endurance will build, your muscles will grow, your torso will shrink, and the rewards of being a part of this team are plentiful and very satisfying!

Paddling-wise, any particular goals for yourself or the team?
Tina: Longer, faster, harder?
David: I can be stronger, and I can work out off the water harder. I will push myself harder than last year. As humans, we should always strive for personal growth, and make each year better than the last. As Coach Em always says, "You get out of it what you put into it."

If you could change one thing about the Team, what would it be?
Tina: I wish that we all lived closer to each other and the practice site. Wouldn't it be cool to take a long lunch from work to paddle? :-)
David: I would make our female paddlers uglier, this way I could concentrate 100% on paddling. Then again, that's one of the incentives of paddling on this team: HOT WOMEN! Shucks, I don't know...

Favorite part about being a Space Dragon?
Tina: The team attitude, we work hard and we love competition but we also take care of each other and have fun off the water.
David: This is not just a team, it's a family! It never ceases to amaze me how much this team loves each other and takes care of its own. It would break my heart to not be a Space Dragon someday.

You have a single brother or sister. What Space Dragon would you consider hooking them up with?
Tina: Luckily my bro's not single so I don't have to answer!
David: Joanne. I love flying China Airlines because their female crews are always so beautiful, and pretty darn hot in those uniforms. Joanne would fit right in. Now I need to find a brother. Any volunteers?

Most interesting character you've met through the team?
Tina: Gio (our caller from a few years ago) and her attitude when she got all fired up in a race and Janice cause she can go from [almost] flashing the mens team to super nurse without missing a beat
David: This has got be Devant, but with Galen a close second. Both guys are very interesting, funny, and outgoing, if not a little peculiar.

Any interesting facts about yourself - or secrets that you want to divulge?
Tina: Secrets with you guys? ha!
David: I'm a big, big NASCAR fan. The "Asian Redneck" my friends and colleagues have often called me. I prefer to own Japanese, German, or Italian engineering as my own personal vehicles, but when it comes to auto racing, I'm all about American horsepower. Go Jimmie Johnson (#48)!

Who got you into Space dragons/Dragonboating?
Tina: I saw that there was a dragonboat team at work and thought it would be fun to try. I was going to try the sailing club but I missed the intro class.
David: A friend had told me about dragon boating in mid-2007. I looked up the sport and thought it was interesting. In January 2008, I looked up teams on the Internet and decided to join Space Dragons. They had a cool team color, an awesome logo, an air of friendliness about them, and was the team of Northrup Grumman. I worked on Grumman F-14 Tomcats for 6 years in the Navy. I still hesitated, but a couple of weeks later I met Grace through this same friend, and she convinced me to join right away. Not only did Space Dragons become my beloved dragon boat team and family, but Grace also went on to become one of my dearest friends.

Is Galen a hottie?
Tina: Of Course!
David: So much so, that if I were single, I would not have him around me to increase my own chances at hooking up with someone.
Posted by Galen at 2/27/2009