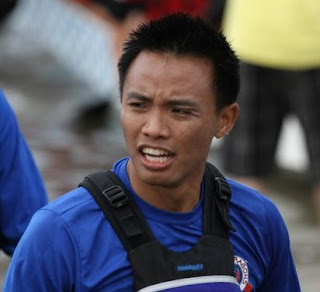 If you could have an endless supply of any 3 food items, what would you have?

How long have you been paddling and what were you thinking when you got into Space?

I started paddling in August 2010, so accounting for a month of offseason, I've had roughly 4 months of practices under my belt and 2 tournaments so far.  As for what I was thinking when I joined Space--I'd googled "Southern CA dragon boat" and ended up at the homepage for SCDBC which in turn had a listing of local teams.  Listed was "Space Dragons (Redondo Beach)".  So, living in Torrance, I was all, "perfect!  They're nice and local, I probably won't have to make any crazy drives or early morning wake up calls then!!".  Oh how naive I was, even a few months ago.

Who got you into paddling and why do you do it week in and week out?

No one person individually got me into paddling.  I'd seen one of the very first Big Long Beach events back when I was an undergraduate, so there was always a bit of curiosity on my part.  Mike from RFX was the guy who finally gave me the final shove to just come on out and give it a try.  I'd asked him if he'd heard of these Space Dragon people that I'd found online and when he told me that SD were his sister team and a bunch of characters, I figured it couldn't hurt.  I mean, just how crazy could it be?
I keep paddling because of equal parts necessity and stubbornness.  Necessity because this past year I'd found out that my family history of high cholesterol had caught up with me--right about the same time I was starting to develop stomach ulcers from a very high stress job. I decided that that was the last straw and so I quit my job, changed my diet, and started going to the gym for the first time in my life this past May (just a few months before I joined Space).  Stubbornness because I'm OCD and I compulsively can not pick up a new thing and not feel like I'm pretty good at it.  If I decide to try something new, I will relentlessly work at it and obsess over it until I'm satisfied that I no longer suck.

Under what conditions are you paddling at your best?

Surrounded by my teammates and with the finish line in sight (literal finish line or figurative, if we're in practice and on a drill).  When I hear the people around me cheering the boat on, pushing us each to not give up, and to dump it all out, I always find myself able to find a second wind and to tap into deep energy reserves that I never knew existed until I started dragon boating.  It's that desire to not let my bench mate and my team down that motivates me to dig a bit deeper, pull a bit harder, if only for just a little bit longer.

I really haven't been with the team that long, so I'm still building up favorite moments.
Notable right now includes my 3rd week of practice or so, we were pulling onto the beach at the end of practice, and Devant was reaching out to give me a fist bump.  Unfortunately for me, that was just merely a distraction as Es and someone else came up from behind and then grabbed me and tossed me a few feet into the air.  As I was getting up out of the water from my first ever dunking, several folks commented "welcome to the team".   That really was one of the moments where I knew I'd made the right call and found my new home and family.
Less public but still as notable was having several senior members and leaders of the team pull me aside in various states of sobriety this past holiday season and tell me how happy they were to have me on the team and that they wanted me to work my ass off to join them on Red.  It's a lofty goal for a guy just a few months in, so if not in 2011, I now have my mission for 2012 then.  Assuming the Mayans were wrong and the world doesn't end.

How do you prep yourself for a race?

I go into deep thinker mode.  While we marshall I'm not one to want to joke around or partake in any hijinks.  I get the whole thousand yard stare thing going on and start taking deep breaths in and out as I try to mentally prep myself.  To me, if I'm not physically ready for the race by the time we'ere about to go, than there's nothing I can do about that---all I can do is get my mind ready for the chaos and fury that is about to unravel.
Leading up to a tournament, I don't think I've really developed a routine yet.  Thus far I've tried to slow down my weight training to something more light in an attempt to insure I don't injure myself.  I'll also paired this with a bit of a focus on strong nutrition in the days leading up to a tournament.

What do you do when you're not paddling? Hobbies, activities, interests?

I love music and express that love on the turntables.  DJing was one of the last things I picked up and refused to stop practicing relentlessly until I felt like I was pretty good at.  That whole stubborn OCD thing again.  I still like to spend time on my decks here and there, but I'm now retired from spinning out in the club scene----to make time for dragon boat.
I was also raised an animal lover.  I can't think of a time in my life where I didn't have pets.  My wife and I currently have 2 cats and 2 dogs and are involved with animal rescue--we're currently fostering an additional kitten and a dog.  Fur on my sweats or PFD will not be an uncommon sight.
And finally, food.  I don't like to call myself a foodie, as I don't have a super well trained palette.  But, I do enjoy eating and am always reading on various food blogs to learn about the restaurant scene in LA and to hear about what's new/hot, etc.  It can be a new fine dining, Michelin star rated restaurant or the latest and great food truck.  If it's something that sounds good to me, I am going to make an attempt to try it and am often organizing restaurant trips with my like minded friends. 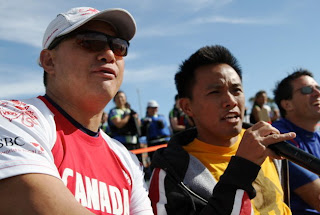 Any advice for newbie paddlers?

Keep at it.  It's going to hurt, but don't let that discourage you.  To a certain extent, it never gets "easy"---if you end up loving the sport, you'll always find something new to challenge you, be it technique or general fitness.  But you won't reap the rewards that the Space Dragons have to offer until you decide to not only keep at it but until you decide to jump into the deep end.  Once you do that and your teammates get to know you as a person and not some stranger on the boat, you start to see just how awesome a group of individuals this team is--and that's when dragon boating becomes rewarding not just on a physical fitness level but on a far more personal level.

Paddling-wise, what particular goals do you have for yourself and for the team?

What makes a champion?

Heart and desire.  The ability to define their goal, the willingness to work and sacrifice toward that goal, and finally, the ability to dig deep within themselves to see them through to the finish line.  In dragon boat especially, it's not always about the finish line or the other boats, but do you have the heart and desire....the guts to put it all out there to run a great piece?  If so, you're a champ in my book.

If you could change one thing about the Team what would it be?

We really would be based out of Redondo Beach!  The commute would be so much easier and I suspect that the water would be nicer! :P

Best thing about being a Space Dragon. 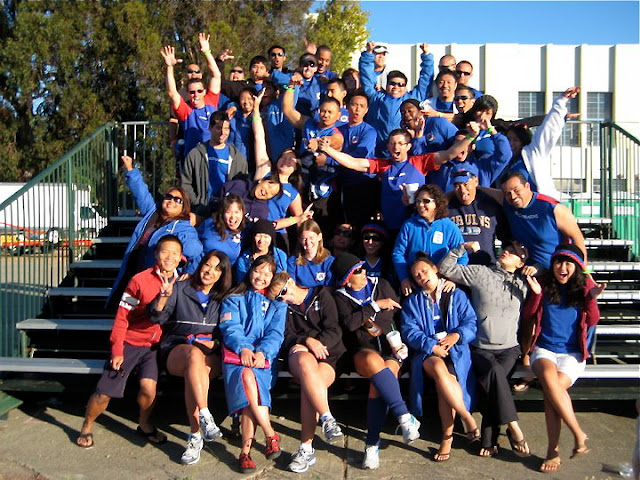 Easy.  The people.  Getting myself out of bed each weekend isn't so bad because I know I'll be spending time with a group of people who never fail to bring a smile to my face.  Be it Pearl bossing around Galen or Ceez with a wholly inappropriate joke---Space Dragons practice (or any SD get together) means hilarity *will* ensue.
And also, you guys are a bunch of beasts.  Considering the circumstances that led to my turning my life around, coming into this group of people and seeing how fit and active everyone was has been an inspirational and motivational turn of events for me.  I'm finding myself being able to do things that I never thought I'd be able to before, and I attribute that to the team and always having those voices behind me, pushing me forward, always bent on me finding my new peak.

Assuming you had a single brother or sister, what Space Dragon might you consider hooking them up with?

Hmm, I have no siblings and I don't wholly know which SDs are single or not.  So, in a mythical world where I do have siblings and where all Space Dragons are single..... 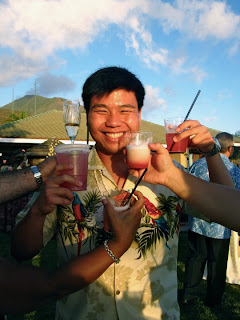 Galen's got to be up there.  "Galen somersaults".  The Space Dragons "cheer".  The scary pictures I found on facebook (Tattoos.  Nipples.  'Nuff said).  "Interesting" isn't a nuanced enough word to fully capture the essence of what Galen brings to the team---but it surely wouldn't be the same team with out it.  You're like the MSG of the team man, you bring that intangible flava' to us.


If you were to trade any SD teammate for an RFX (Ripple) paddler, who would it be?

I don't know that many RFX folks, so it'd be hard to say.

If you were to be stranded on an island with any 3 SD paddlers, who would you choose to get-by and pass the time with?

Are you the only child, the eldest, the middle child, or the baby? Do you fit the stereotype?

I am the only child of a single mother.  I don't think I fit the stereotype.  I certainly wasn't spoiled growing up and I'm far from clingy.  I do tend to be quite independent and more than OK with just hanging out by myself, so I suppose that's somewhat stereotypical.

First thing that comes to mind when you hear the word(s):

Name something that our readers don't already know about you.

I was  once an amateur competitive paintball player.  My company used to have regular paintball outings and a few of us started to get really into the sport and starting going on an almost weekly basis.  We ultimately formed a tournament team and started competing in the local Southern CA tournaments.  We were even approached with the possibility of sponsorships and going "semi-pro" but I moved to Houston before any of that ever came to be.  I've not really played again since then.
Posted by devantosaurus rex at 1/25/2011