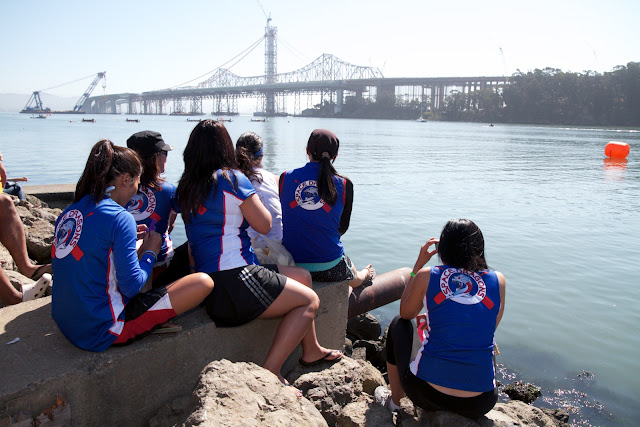 The Space Dragons came into the San Francisco International Dragon Boat Festival this year will a lot of momentum.  We had just come off an amazing showing at Big Long Beach, and earlier at Alcan, Baby Long Beach and Tempe.  Treasure Island (aka "TI") was to be the culmination of a tremendous amount of hard work all season long by all of us.  By all standards 2011 was so far a record year for us, and there was a lot of pressure to keep it going for T.I.  Well, we all know that we DELIVERED!  Space Dragons put out the best showing we have ever done at T.I. and stayed true to our record breaking ways. 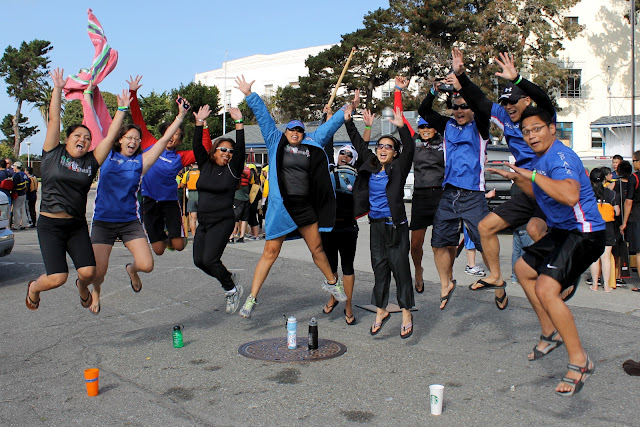 T.I. is the biggest DB tournament on the West Coast and the competition is nothing short of elite. We put our best forward and showed the Dragon Boat community that we are hands down one of the teams to look out for.  GO SPACE!
SATURDAY

We  started on a high note before even stepping in the boats.  Our very own J. Anderson thwarted a backpack snatching attempt the night before in the mall near our hotel.  He subdued the perp with a bear-hug.  We SD’s do it all: paddle, community service and now fight crime!  For the duration of the weekend, James A. was renamed "Hero."  Unofficial eye-witness accounts also mentioned Anderson shouting,

“We strike FEAR! Emily [Chi] is our coach!!” while holding onto the thief (James has yet to confirm this). 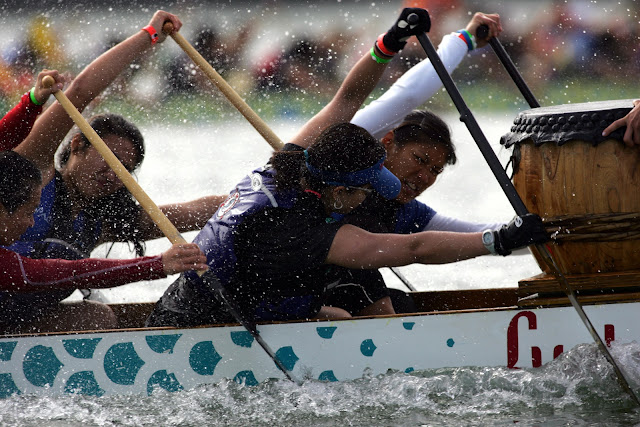 Saturday races began with BLUE finishing a respectable 2nd in its first heat of the day.  RED lived up to its reputation by taking first place in both its heats.  Our wonderful WHITE finished the mixed races getting 2nd place in its second heat.

MORE RESULTS (CLICK HERE), SD LADIES and MASTERS also flexed their muscles by earning 2nd in their respective heats.  OPEN boat yanked hard through the water and took 1st, allowing them a guaranteed spot to the finals dance on Sunday.
﻿ 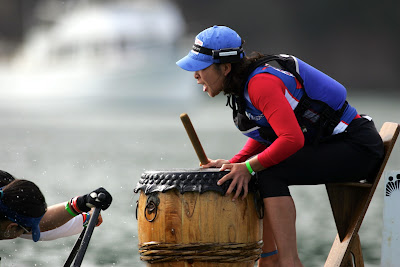 Next up was RED in the Visitor’s Cup championship. We played up against some of the big dogs and were able to medal with a third place finish.


BLUE had a hiccup in our first heat but came through big time by re-focusing and pulling off a gold medal race in Rec A Consolation.
WHITE did us all proud by making it to Rec B Consolation.  There are lots of young, up-and-coming paddlers and it will be exciting to see them grow.
﻿﻿MASTERS fought fearlessly against some heavy-hitting contenders making it to the finals.  They narrowly missed medaling in their 300m final but it takes nothing away from awesome our Masters are.  They are the heart, soul and backbone of this Space Dragon team and like always showed us young punks what true grit really is! 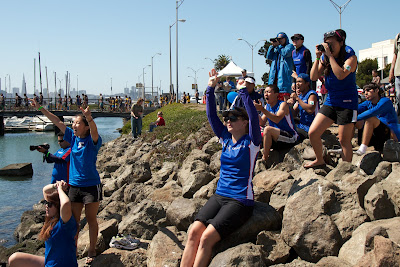 With the Visitor’s Cup out of the way, RED set their sights on what they were really there for: COMP A!  And they reached their target.  They were in the last race of the day going head to head with the likes of One West and Jet Start along with other big teams.  It is not a cop-out or a spin on the outcome to say it was amazing just to have them make it to that finals in the top division.  It is the truth.  It is absolutely amazing that our team made it to Comp A. We are all proud of what Red accomplished and all 60 or so of us were part of that Red boat willing it forward through the water!
Sunday’s highlight was obviously the Spripple Flash Mob.  It was such a monumental event that it deserves its own recap!

So think back, if you will, to the days when the word “epic” wasn’t so overused so this has more meaning, because it deserves it: Spripple Party Rock Anthem Treasure Island flash mob 2011 was EPIC.

Talk about something amazing that came together seamlessly through word of mouth and an eerie obsession with shuffling. We studied YouTube videos, counting to eight, eight times, many times. We ground our feet into Mother’s Beach grass until they were black. We got kicked out of a hotel basement… 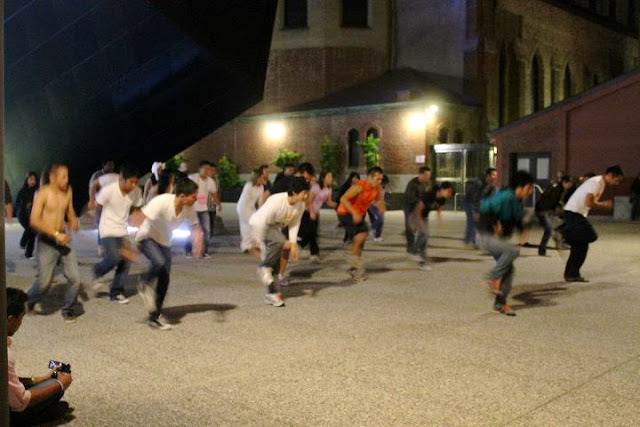 But check it – all the better to practice outside with a nighttime audience including one loud drunk dude! Practice hard, shuffle easy. We ran through the whole thing several times in the cool Bay air, which meant lots of time to watch Aaron and Emily dance adorably. Eventually we had to head back in to pack our gonna-get-scuffed shoes and get some rest.
And oh how it came together when it was time to perform on Sunday. Not knowing exactly when we’d have time to do it was half the fun. The marines were nice enough to play the song when requested and the crowd formed before everyone had even joined in. A beautiful sea of blue and orange. Robot, Jesus, Airbender banana, and hipster glasses abounded. Most fun ever? Most fun ever. 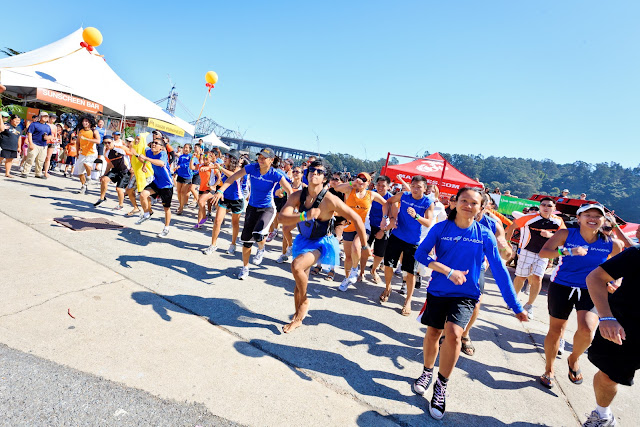 Thanks to Davin for brainchilding the idea, Devant and Noah for organizing it, Zina for making incredible costumes, and everyone for being fun and awesome.

It is time to take a step back and really take in what we have accomplished this season and at T.I.  It is easy to lose perspective and focus too much on the finer points.  Think about it;
we are just a bunch of guys and gals who paddle for fun and train on our personal time after long work days and super early on weekends.  We push our bodies to uncomfortable limits.  We don’t have to, but we do. Week in and week out.  And it is through ALL of our individual efforts and personal sacrifices that we have become one of the best, most-respected teams around.   We should never lose sight of this.  We are amazing because we push ourselves to be amazing.  It is important that we don’t focus too much on the hiccups and minor failure.  Likewise we can’t allow ourselves to bask in our victories and let off.  And if we can manage these two things then just wait and see what we can do next season!
“Success is not final.  Failure is not fatal” - Winston Churchill
-CJ
Much thanks and love to: 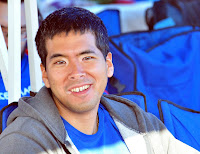 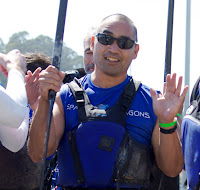 You mean my paddle equipment doesn't just show up via
garden gnomes? Rod and Kevin K for equipment transport

Our lovely sister team, RIPPLE EFFECT for the amazing spread and hospitality! SPRIPPLE <3

added Special THANKS to Christine Y. and Lesley for helping to select and collect photos for this recap.


...and ever the most important part of why we are who we are, is YOU! 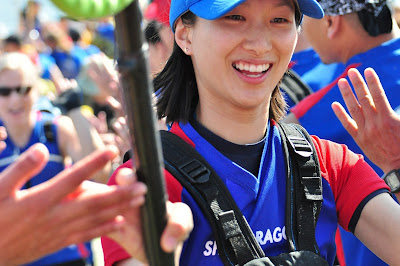 So what was this recap really about? Why hold so much anticipation on seeing this recap if not to reflect upon races and events most of us know the result of already?

My simple answer is love; TI was all about it. This season and what we've done with it could not have been possible without the individual efforts and sacrifices of each person within this SD familia. The achievements, medals, and records we've collected along the way are the by-products of that love.


Classic SD bromancing
But just like love, art, fashion, or even Spacebook--the end of this season does not mark a finished product for us as a team. The end of this '11 season marks a milestone where we pushed our limits towards growth, stayed true to taking care of one another, and truly grew as ONE TEAM. Sure, we'll constantly evolve and change just as we have throughout these incredible 10 years, but we'll never be "finished" doing it for each other. 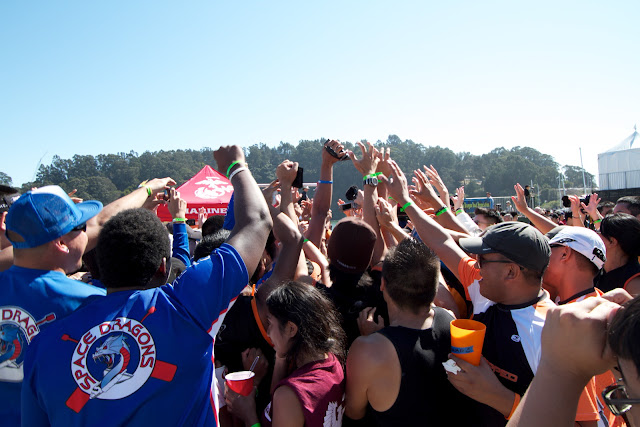 As our own R. Clark. poignantly puts it: "RED, WHITE, and BLUE. As colors of the American flag they inspire pride and unity; and as this amazing group of people called Space Dragons--in many ways, they inspire the same. What transpired over the last few days (during TI) represents 9 months of blood, sweat, and tears. 9 months of personal achievements, and cross-inspiration for 60 people. 9 months of building on a 9-year foundation of early mornings and late nights, of new faces and old friends, of long weekends, pulling water and pounding our bodies into submission. 65 people representing 6 boats (White/Blue/Red/Women/Open/Masters) in 17 races, representing ONE team, traveled to San Francisco and did something amazing. Yes medals are cool, and we got a couple of those trinkets, but we EARNED SO MUCH MORE! Besides Space breaking new achievement records at TI, and expanding our circle of Family and Friends, those 17 races (with a little dash of SHUFFLING) earned us MAJOR RESPECT among the greater DB community. And what made all this possible? From practice and training, to travel and lodging, to race day management and execution, to watching after our overzealous revelers deep in celebration--we did it while taking care of each other.